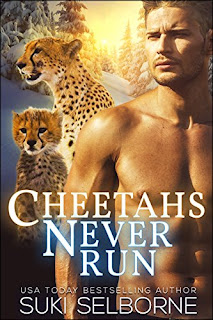 She carried her baby for nine months... and then carried the secret for four years. But now Tyla's ex Quinn is back.

It’s not easy being a single mom, or a witch with no magical skills. It’s even harder for Tyla and her little girl on weekends and holidays, when pretty much everyone else in their supernatural community hangs out with their big ol' families. Tyla makes it work, because she has to. Her daughter means everything to her. And the nagging feeling that's something's missing? Yeah, burying that became second nature a long time ago.

But then cheetah shifter Quinn, her high school sweetheart, shows up in Rocky Falls for a wedding. Just like that, Tyla is forced to confront her past — and share her biggest secret.

Could there really be a happy ending out there for Tyla and Quinn, after all these years?

This was a really quick read, just over 70 pages and it took me less than an hour to read. So this is really good if you're short on time but still want to read a good paranormal book.

Tyla and Quinn parted ways and she found out she was pregnant. She knew he didn't want to settle down so she kept the baby a secret, until he came back into her life.

I don't usually like kids in romance books or the whole lying about having a kid, but Tyla's 4 year old is really cute and it doesn't hurt that the kid is a cheetah shifter. Quinn comes back to town for a wedding but he doesn't know that he has a four year old daughter. Tyla was scared that he would fight for custody and win and she'd never see her baby. Quinn and his family aren't very affectionate and she thought it best just to keep him and his family away. I thought it was kind of funny how Quinn finds out that the little four year old is his. Kids, they never seem to do what you want them to.

But things have a way of not working out the way you want and that's what happened when Quinn comes back to town. All I kept thinking was that if Tyla really wanted to keep her daughter a secret from Quinn, she should have moved out of the town they both grew up in and he might come back to for visits.

Even though Tyla want to keep her distance from Quinn, it's almost impossible once he finds out that he has a daughter. He wants to get to know her and find out why Tyla kept her a secret all these years. Their relationship isn't an easy one but I really like how they got to know one another again and how we see that Quinn isn't as bad as Tyla once thought he was. It was a sweet story and well worth the read.