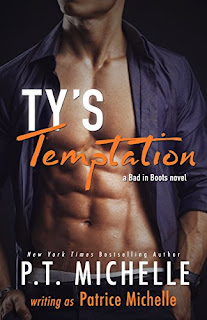 With a genius IQ, Evan Masters has always been one step ahead of most people, except when it comes to matters of the heart. When she stumbles across an intense, tightly controlled man visiting town for a short time, she realizes he’s the perfect person to show her the ropes with no strings attached.

Ty Hudson agrees to teach Evan all he knows, but he insists on doing it his way. As their seductive dance turns into a smoldering burn, Ty quickly discovers that “innocent Evan” has many intriguing layers, making him want to uncover every single one, no matter how long it takes.

I grabbed this book when it was free but it's no longer free the last time I looked. It's book 2 in this series but I don't think I necessarily needed to read the first book in order to enjoy this one.

Ty and Evan's first introduction to each other is really funny. There's a big misunderstanding and from there they start to get to know each other. Ty is very controlled, his emotions and every other part of his life and Evan wants him to let go a little. He's not looking for a relationship but when Evan asks for his help, he's not sure what to make of her proposition or her but he's willing to help her out...his way.

Evan has a guy constantly after her to go out with him but she doesn't want to. This guy knows she's a virgin and Evan thinks that's the only reason he's pursuing her. But her father is the Sheriff and she knows how to take are of herself. If she really didn't want this guy chasing after her she should have made it very clear to him that she wasn't interested from the beginning. I didn't like how that part of the story line went down.

They both agree to a fling but just for a few days while Ty is in town for his sister's wedding. It's only when they spend time apart that they realize that they have more than just a 'flings' worth of feelings for each other. I really like how this one ended and really liked both Ty and Evan. They were well suited for each other.