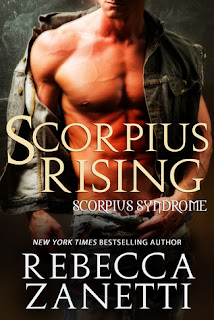 For Nora Medina it started when she was yanked off a gorgeous Hawaiian beach, still in her bikini top, and onto her ex-husband’s government jet. A microbiologist doesn’t see a lot of emergency extractions, but marriage to Deacan Devlin McDougall taught her plenty about adrenaline. Nora knows it’s more than their unfinished business that has brought the sexy, maddening Scot back into her life. But she’d never have guessed this.

As a soldier of fortune, Deke has seen too much by any standards. But the terrifying bacterium sneaking through the highest halls of power isn’t his kind of battle. All he can do is keep close to his brilliant, fiery Nora and fight like hell to keep her safe. Because if he lets her get sucked down by the horror that’s coming, he’ll never get another chance at her heart . . .

This is the prequel novella to the Scorpius series. I haven't read this series yet so I'm glad I started with this novella since it gives a bit of background on the world that this series is set in.

Microbiologist Nora Medina was made to get on a plane and finally meets up with her ex husband, Deke who works for the government. There's a bad outbreak about to happen and so he enlists the help of his ex to try and stop it. A meteorite was found and the kids who found it, cut it into pieces releasing bacteria spores into the kids systems when they stupidly tasted the meteorite. I mean seriously, who does that? Now the kids are sick and they have no idea how to treat them. This is the reason that no one has seen this particular bacteria before and has no idea how to combat it. In other words, it's a real clusterfuck and things are about to get real bad.

While Deke and Nora are trying to re-kindle their romance because they never stopped loving each other, people are being infected faster and faster and most of them are dying or worst, becoming crazy. There's a madman on the loose and things have gone from bad to worst in a short amount of time.

I really liked the world building, as we see what's happening, how it started and just know what's coming. I really think this was a great start to a new series.