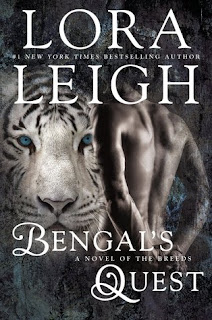 He was a shadow, ever shifting and insinuating, able to blend in everywhere and anywhere. The elusive ideal conceived and created by the Genetics Council, he went by just as many names as he had identities—the last one being Gideon.

Now calling himself Graeme, he hides in plain sight, terrifyingly close to his goal. A rogue Bengal Breed, he has loyalties to no one but himself. And he has a need for vengeance that surges hot and swift through his veins.

Graeme plans to exact an extreme and ruthless vendetta against those who wronged him—Breed and human alike. All will suffer his wrath: those who created him, those who pretended to love him, and those who betrayed him.

That includes the one at the center of it all: a seductive, enigmatic woman helpless against the man whose desire is just as desperate as his need to destroy.

And he’s on her scent…

I've been reading this series for years and each book has been so good but I always look forward to the next book in this series.

Graeme was made in a lab. He was tortured and had to watch and listen as others around him were also tortured as they were experimented on. He's a Breed, a Bengal shifter and is as lethal as any shifter has ever been. Cat saved Graeme years ago by giving him some of her blood. But when they both escaped, they didn't have much to do with each other until now because she was a child and his mate.

Cat was born human but turned into a Breed when she was a child to save her from an illness. She's been hiding from those who want to kill her. She's had to take on a persona that was not her own in order to keep herself hidden but that is coming to an end.

If you haven't been reading this series then reading this book would be very confusing because of the different souls that remember their past and the differing names of the same people. The Breeds see Graeme as a monster or boogeyman because of what he is and what he's capable of doing. It was interesting to finally see Cat and Graeme come together and all the secrets to out and there were quite a few.

I really like that this book tied together a lot of loose ends about Graeme and now I understand him more.