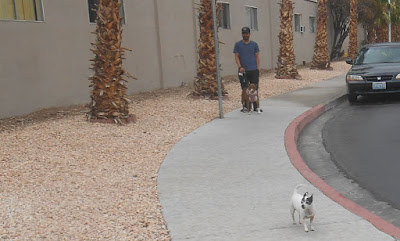 This guy moved into the apartment complex across the street last year and has 2 dogs. The big dog he keeps on a leash. His little dog is never on a leash and likes to run up to other dogs and play or lick them in the face. I've seen the little dog almost get bitten several times because he refuses to keep it on a leash and it runs up to every single dog it sees.

I had my camera ready this time when I saw the guy walking his 2 dogs. I keep telling him that there are dogs in the neighborhood that are not dog friendly and he just nods his head and smiles. He says to me that his dog is friendly so it's fine. This guy is an idiot. Thankfully Falcor likes most small dogs or this would have been a bigger problem. Falcor doesn't like big dogs though.

Just last week I watched his little dog run up to a pit bull on a leash and get right in the dogs face. The owner had a hard time keeping them apart and he had to bend down and keep his dog from biting the little dog because the owner wasn't even out of his apartment yet. When he did finally come out he yelled, "Paco" and the dog went running but the little dogs owner didn't even say sorry or anything to the other guy. We both looked at each other and just shook our heads. Someone is either gonna call animal control on this guy and he's gonna get a fine or his dog is gonna get bit by one of the non dog friendly dogs he runs up on one of these days.

Oh and by the way, the people who had the bratty kids in my courtyard that always teased my dog...yeah they were evicted this week. Buh bye!