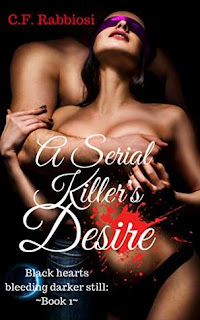 But this time, he's taken the wrong girl. This time, he may be captured instead, his heart chained by an astonishingly well matched foe.

The description of this book is what made me read this one. I've always had an unnatural fascination with serial killer's so after reading the description and a couple of reviews, I figured I'd give this one a shot. It sounded different from what I usually read and I was right, it's different...and dark. Unless you have a strong stomach, a fascination with how a serial killer's mind works and are in the mood for some twisted scenes, I wouldn't recommend this one. But if that sounds good then by all means give this one a try because it will take you on the dark, twisted ride of your life. Holy hell, this guy is one sick, demented dude.

Antone kidnaps Jynn but he might have found his match with her because she has the same dark, twisted tendencies that he does. That by itself made this story interesting and totally flipped the story at one point which made me even more interested. These two together are one twisted mind fuck after another but I think that's what kept me reading and enthralled in the story.

This story was hitting me pretty hard, the dark nature of his fantasies and what he does is disturbing beyond belief but when Jynn enters the picture and he realizes that he now has someone that he might want to keep around instead of killing, it makes him think twice. I was on a hell of a ride...and then it ended on a cliffhanger. I wanted to throw my Kindle across the room. That's one of the reasons I read a few reviews before reading a book if I can help it but none of the reviews said anything about a cliffhanger. So I'm letting you know...there's a cliffhanger. Grrrr!

The story itself was good. Seeing inside a serial killer's mind was twisted but interesting. Their romance was scary as hell because of who they are and what they think. But the cliffhanger just ruined this for me. Give me an entire story or don't give me anything at all. This book would have rated much higher for me if it hadn't ended on a cliffhanger.