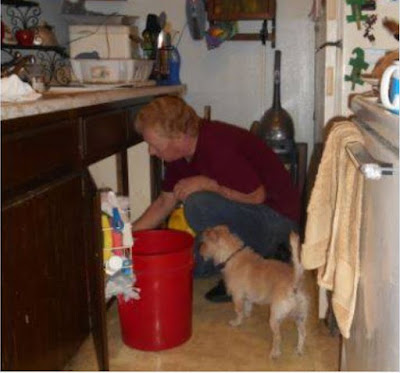 2 years ago my water heater exploded *not really* and water leaked out over night all over the inside of the cabinet it was in, the kitchen floor and through the kitchen wall to our bedroom and all over carpet on my side of the bed. Everything on my side of the room that was on the floor got drenched and ruined. Thankfully it was just a few books and a nice pair of suede boots that were too high for me to walk in without falling down anyway. It was the weekend and we called the emergency number for the office and no one picked up and when Ken knocked on her door she refused to answer. So we soaked up as much as we could and put fans on the carpet to try and and dry it. It was in the middle of the summer so opening the bedroom window really helped dry it out in a couple of days.

Later that night though the bathtub, bathroom sink and kitchen sink backed up and smelly black water started filling the sinks and tub. The manager refused to answer her door or phone until Monday morning and when we asked about it she said she doesn't get paid to be on call on the weekends. So I guess too bad for us, huh?

So after 4 days of not having running water in my kitchen, a stopped up sink and nasty black water that kept coming up in the sink that Ken had to keep bailing out, everything was finally fixed. Oh and don't mind my messy floor because on the day I took the picture I hadn't cleaned the mess since I didn't have running water yet. Falcor was right by Ken watching what he's doing over there. My kitchen sink got fixed! My bathroom sink was fixed! The new hot water heater is not leaking and we had hot water again!

I just think it's ridiculous that the manager refused to do anything on the weekends if something like this happened though. Just call a plumber and get that stuff fixed instead of leaving it for days. Thankfully we don't have that manager anymore.