Review: His To Protect by Elena Aitken 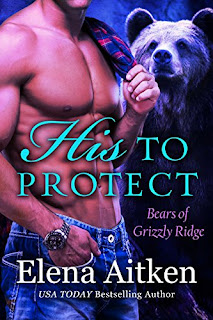 Every Shifter has a mate. She's his. Now all he has to do is convince her that what they have between them is more than lust—much more.

When Harper's life begins a death spiral, she does what any self respecting woman would do—she heads for the mountains. More specifically, Grizzly Ridge. A brand new—and very remote—lodge in the wilds of Montana where the last thing she expects to find is a very alpha, very sexy mountain man who's more than a little wild himself and doesn't waste any time reigniting feelings in her she’d long since buried.

From the moment he lays eyes on her, Axel knows the curvy brunette is more than just a guest at his lodge. Much more. Every bear shifter has a mate. She’s his. And whether his brothers believe in fated mates or not, nothing will keep Axel from what's his. But first he’ll need to convince Harper that what she’s feeling is more than lust. It’s fate.

Harper needs to get away after her ex makes his coming out as gay, very public. So she and her best friend head up to the mountains where they meet the three brothers who own the hotel and just happen to be bear shifters. The best friend is there to write an article about the hotel and Harper came along with her. While there Harper finds out that her ex embezzled a lot of money from their shared company and he and his boyfriend are setting her up to take the fall for the entire thing and ruin her reputation.

Axel feels an immediate attraction to Harper and doesn't know how to act or control his bear who wants to claim her as his mate. But when he finds out that she's in trouble and needs a new attorney, he offers his attorney's phone number to help her. She needs a place to lay low and he offers his cabin so anyone snooping around won't find out she's there. Axel and Harper feel the mate bond right away and can't keep their hands off each other, so things heat up right away.

Things are going really good when 2 other reports start snooping around the hotel. They're up to no good but Axel's other two brothers are there to make sure they don't make too much of a mess of things.