Review: Immortally Yours by Lynsay Sands 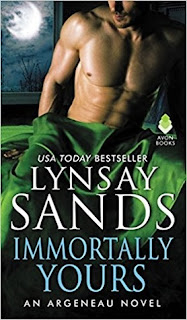 One hundred and twenty-five years is a long time to nurse a crush. That’s how long it’s been since Beth Argenis first met Cullen “Scotty” MacDonald and he instantly became the star of her most X-rated dreams. Back then, he was rescuing her from a Rogue Immortal. Now Beth’s a Rogue Hunter—a damn good one. She doesn’t need saving anymore, despite what Scotty thinks. What she does need is the fierce, wild desire that finally erupts between them.

Scotty has hesitated to claim Beth as his own. But one explosive kiss confirms what he’s long suspected: She’s his life mate. But Beth is tough, fearless, beautiful…and in immortal danger. Unless he wants to lose her forever, he’ll have to rethink everything he once believed about love and destiny as well as confront an enemy who’s terrifyingly close.

Scotty is an 800 year old vampire and kinda still has some weird thoughts when it comes to things. The fact that on two separate occasions he wanted Beth's mind wiped because of the awful things she went through is a real testament to that. He's a Rogue Hunter and goes after other vampires that break the rules. He met Beth when he saved her from a Rogue and knew she was his mate but she needed time to get over everything she'd been through so he didn't claim her.

Beth on the other hand thought Scotty didn't like her since he was always standoffish and not very friendly but she couldn't stop fantasizing about him or dreaming about him. She had a very bad life as a mortal before she was forcibly turned into a vampire against her will. The story was tragic and awful. What she endured because of her father was heartbreaking.

It became very clear that there were other reasons Scotty wanted Beth's mind wiped and he didn't want to claim her as his lifemate. The fact that she had been a prostitute as a mortal was the biggest reason and it seemed like he just couldn't put her past behind him even though she had done just that. It wasn't until she had explained to him why she didn't want her mind wiped and that her life as a mortal made her who she is now, that he finally understood her reasoning and how wiping her mind would change her personality completely. Scotty was a great character and a good guy. He cares about Beth a lot and he shows it. Plus there's just something extra sexy about a man with a Scottish accent.

While they're trying to sort out their relationship, they're also trying to keep Beth safe from someone who wants her dead and keeps setting traps for her. It's a good thing they're immortal because some of the things that happen to them would surely have killed a normal human being.

While this was a good book in the Argeneau series and can be read as a standalone, it really didn't do much for the series itself. It was a fun read though.