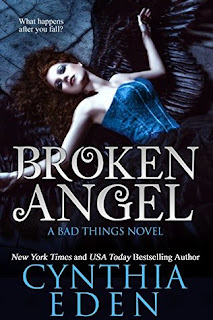 What happens when an angel falls? Find out in Book 3 of Cynthia Eden’s “Bad Things” series, BROKEN ANGEL.

Angel Lila is being hunted—she can feel the hunter closing in behind her. Every move she makes, he’s stalking after her. But does the werewolf on her trail want to destroy her—or can he protect her from the growing darkness that she is trying so desperately to fight?

Werewolf Rayce Lovel doesn’t know what to do with an angel—especially one who makes him think too much about paradise. Lila may be heavenly, but every time he’s near her, Rayce wants to sin. Angels aren’t supposed to feel, but Lila was introduced to the world by way of pain. Pain is all she’s known for far too long, and now, Rayce is tempted to introduce gorgeous Lila to pleasure.

But the longer an angel stays out of heaven, the more dangerous she can become. Lila sinks deeper into the darkness with each night that passes, and she finds herself becoming a pawn in an eternal battle…good versus evil. Is Rayce really her protector? Perhaps he is just the hungry wolf who has been sent to ensure that Lila never sets foot back in her paradise.

A fallen angel has a bad side…and that side is about to be set free.

Rayce is a werewolf and is looking for Lila but he's not the only one looking for her. Rayce has more powers than a typical werewolf which was interesting. Luke the 'bad' brother sends Rayce after Lila and tells him to bring her back.

Lila is an angel who has fallen and was used by Leo who is supposed to be the 'good' brother. She escaped the evil guy who was holding her and is on the run. But angel feathers are a hot commodity on the black market and she might be turning into a demon.

Rayce and Lila are attracted to each other but they'll need the help of both Leo and Luke if they stand a chance to be together, which comes with it's own problems. There's another evil guy after Lila, but this one is after her because Leo made a deal with him a long time ago and really messed up with this deal.

I really liked Rayce and Lila and seeing Leo and Luke together and actually talking was interesting. They actually brought up some interesting ideas that I hope are discussed more in the next books. I'm hoping that the fact that they've been told that eventually one brother will kill the other doesn't stop them from working together in the future.

I loved all the action in this book. All the crazy twists and turns this story took and how it ended. You're in for a wild ride with this story but a really good one.