Review: Claimed By Her Her Cougar by Felicity Heaton 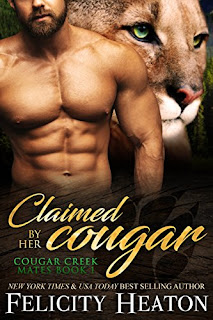 Rath is one alpha shifter not looking for a mate... until Ivy strays into his territory.

Having lost his parents and mate in a brutal attack on his cougar shifter pride by a hunter organisation, Rath burns with a need to keep humans off his land and out of his life. He’ll do whatever it takes to protect his pride from them, but when a lone female wanders into his territory, it isn’t a burning need to drive her away he’s feeling and it isn’t his pride that needs protecting—it’s his heart.

Down on her luck, Ivy follows a lead to a spot where she hopes to photograph black bears, but what she discovers there is a mountain of a man who lacks manners and seems determined to drive her off his property—a man who stirs unbidden fire in her veins and a strange sense of home.

With a pride gathering on the verge of happening at Cougar Creek and the air charged with a mating heat, the last thing Rath needs is a human on his land, especially one as beautiful and alluring as Ivy, one who rouses a fierce need to fight for her, but he can’t convince himself to let her go… and that proves dangerous for them both.

This is the first book in the Cougar Creek Mates series and since it's about shifters, I decided to give it a go.

Rath is busy repairing the cabins on his land for a pride gathering he knows is about to happen. Cougars being solitary animals, it's dangerous to have so many males in one place looking for females to mate with. So the last thing he wants is a human female wandering onto his property trying to take pictures of bears. But he's attracted to Ivy even though he doesn't want to be. Rath is curt, rude and gorgeous so even though Ivy knows he doesn't want her there she is attracted to him and sticks around when he offers to let her stay for the night.

I love a gruff, growly alpha male who ends up being a big teddy bear or in this case kitty cat. Not that I would be saying, "Here kitty, kitty." to a cougar if I saw one but in this case it fits.

Danger comes when someone unexpected shows up and Ivy finds out exactly who and what Rath really is. I'm not sure I would have taken that as well as she did. We find out more about his past and Ivy has a big decision to make. I like the appearance of Rath's brother and how it looks like he'll probably be a big part of the next book in this series.

It was fun watching Rath and Ivy get to know one another and try to fight their attraction in the beginning. He was rough around the edges but we soon see he's not as rude and gruff as he appears to be. It was a good beginning to the series.