Review: Kissed By A Dark Prince by Felicity Heaton 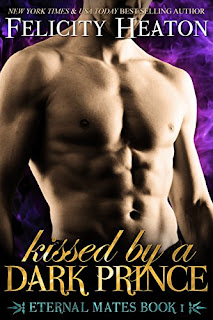 A dark elf prince. A demon-hunting doctor. One bite will change their lives forever in...

Olivia thinks it’s her lucky night when a dangerously handsome unconscious fae ends up on her inspection table. He’s her chance to redeem herself with her employer, the demon-hunting organisation, Archangel. But when the tall, dark and deadly immortal warrior awakes, she gets much more than she bargained for…

Attacked by his enemy in the elf kingdom, the last thing Prince Loren expects when he comes around is a beautiful angel watching over him and medical technology of the mortal realm. Hazy from his injuries, all he can focus on is the pulse ticking in her throat and the sweet allure of her blood.

One single bite reveals she is his eternal mate, triggering a bond between them that will leave him weakened until it is completed… or broken, and pulling Olivia into the crossfire of his ancient feud.

To protect his people and his mate from the machinations of a madman, Loren must risk everything by working with Olivia at Archangel to find a way to break the bond blossoming between them.

But will Loren be strong enough to place duty before desire and give up the one thing he has waited millennia for and craves above all others—his eternal mate? And will Olivia be able to resist the incredible heat that burns between them and the temptation of her dark prince’s kiss?

Olivia worked for the Archangel Organization studying fae, demons and other paranormals that ended up in the facility. The first time she meets Loren he was unconscious on her table and she was studying him before he woke up. She's never seen his species before and finds his body attractive. He was torn up pretty bad until he suddenly wakes up and takes her blood to heal himself.

Loren had transported himself out of the room when the hunters showed up and put her in danger. But ever since he took her blood, he couldn't get her out of his mind. But Loren and his brother Vail had been at war for centuries and now that Vail was back, he needed to focus on that and not the woman who was never far from his thoughts.

Loren figures out fairly easily that in biting Olivia he's found his fated mate but she's human so that's not a good idea. He's sure that his brother put her in his way to find her so he can use her against him in some way. She's a scientist so she thinks that she can find a way to break the bond between them and he agrees to go with her to her laboratory so she can run some tests but that doesn't go off without a few hiccups.

As Loren and Olivia try to stay out of danger and get to know one another, it's very apparent that they are more than a little attracted to each other. But Loren's first job is to protect his people from Vail and not get involved with a human.

There's a lot of action, fighting and growling in this book. I loved Loren, he's a really interesting character and Olivia and he are a great pair. They are smoking hot once they do get together and find that they have all kinds of feelings for each other. This was a great start to a series.