Review: Watch Over by Amy Reece 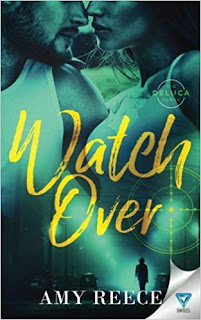 Melanie Blythe has a house, a career, and a cat. She doesn’t need a man.

But she isn’t the only one who’s noticed the gorgeous cop down the street. When her faithless cat prances home from the cop’s house with a note tucked in his collar, it might be the beginning of something beautiful…or it might be Melanie’s death warrant.

Detective Finn DeLuca is stuck at home recovering from a hit-and-run accident, and has plenty of time to wonder about the woman two doors down. There’s something mysterious about the beautiful brunette, and he’s determined to get to know her.

But someone else has other plans.

As the two grow closer, someone is watching—and waiting. Sooner or later, their chance will come.

And the two lovebirds will never see it coming.

Melanie finds herself adopted by a stray cat that wanders in her place and one day after the cat has been outside for a while it comes back with a note attached to its collar. It's from Finn who lives down the street and had no idea that he and Melanie were sharing the stray cat. They share notes back and forth for a while, neither one of them really wanting to meet face to face. Melanie is shy and works from home as a writer. Finn is a cop who is recuperating after being hit by a car. He's in a wheel chair and trying to get used to doing things himself even though his family comes over to help all the time.

Things start out so incredibly cute between these two. I thought it was a really sweet way to introduce yourself to your neighbor.

Right as Finn and Melanie are getting to know one another better and get closer, small bizarre things start happening. Things in her home start getting moved around. At first she thinks she is just imagining it and then it happens more frequently. When the danger really ratchets up, Finn and his family step up to help find out who's stalking her and why.

I was liking this story quite a bit until the nosy neighbor shows up and just sorta barges into their lives. The fact that neither of them tell her off amazed me because there's no way I would be letting this weirdo in my home. But maybe that's just me. The romance was sweet, the stalker was creepy and Finn's family are great. I really enjoyed this story.

Disclosure: I received this book for free via NetGalley but all opinions are my own.
Posted by Mary Kirkland at 12:00 AM