Review: Captured By the Vampire by Kellie McAllen 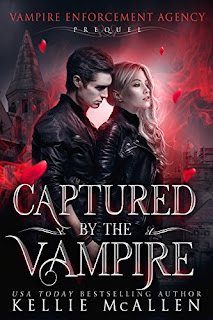 When Zoë reveals proof of vampires to the world, has she sentenced the one she loves to death?

After years of being alone, Rowan is ready to end his immortal life. Weak from starvation and overcome by bloodlust, he attacks a human in public and is captured by police.

When Zoë discovers that the intriguing, new prisoner brought to the jail where she works is a dangerous vampire, she can’t resist revealing the evidence to the world. But as she gets to know him, she realizes he’s not the monster everyone thinks he is.

Rowan’s life finally has meaning again as more vampires come forward and he learns he’s not as alone as he thought. But his chances of release disappear when the world explodes at the discovery of vampires, and he knows he’ll die in prison.

There’s only one way Zoë can save the vampire she’s fallen in love with, but is she brave enough to give up everything for him?

This novella is the prequel to the Vampire Enforcement Agency series.

Rowan lost his mate a long time ago. He's been so lonely without her and is ready to die and turn to ash. That is until he comes across a car accident and his blood lust takes over. He's been starving himself, so when the police come and he's arrested, he's too weak to break himself free.

Zoe is miserable, her mother is a drunk and her sister is a bit of a jerk. She works as a janitor at the police station and finds herself intrigued by Rowan. But when she does something dumb, she puts not only herself but Rowan's life in jeopardy.

These two really needed each other. They came across each other at just the right time when they both needed someone and they fit together nicely. I really liked this prequel to the Vampire Enforcement Agency series, which I've never read but am intrigued enough to want to read more now.

I liked seeing how the world found out about vampires and how the treaty between humans and vampires came about. It was a quick read but gave a lot of info for the series.