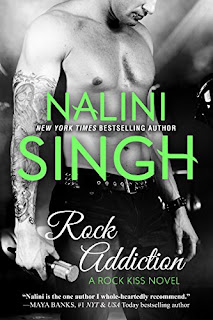 Molly Webster has always followed the rules. After an ugly scandal tore apart her childhood and made her the focus of the media’s harsh spotlight, she vowed to live an ordinary life. No fame. No impropriety. No pain. Then she meets Zachary Fox, a tattooed bad boy rocker with a voice like whiskey and sin, and a touch that could become an addiction.

A one-night stand with the hottest rock star on the planet, that’s all it was meant to be…

Fox promises scorching heat and dangerous pleasure, coaxing Molly to extend their one-night stand into a one-month fling. After that, he’ll be gone forever, his life never again intersecting with her own. Sex and sin and sensual indulgence, all with an expiration date. No ties, no regrets. Too late, Molly realizes it isn’t only her body that’s become addicted to Fox, but her heart…

Molly and Fox both come into this having had bad childhood's that scarred them. I like a scarred character and like seeing them get past their problems. Fox is in a rock band and Molly is at a party with her sister, Thea and Fox sees Molly and is attracted to her. He seduces her and asks for a 1 month long fling. I found it a little hard to believe that with all the walls Molly had built up around herself and the fact that she was still a virgin that she agree's to a fling with him.

She doesn't want anyone to know that they are seeing each other so no hand holding in public and she overreacts quite a bit at first. I get that she's not used to his lifestyle but I didn't like her attitude at first. She does mellow out which was nice though. There are a few arguments on both of their sides that could have been easily take care of if they had just talked. Communication is always the thing that causes problems in this kind of book.

They quickly fall for each other and decide to take things for longer than a month but again, the communication or lack there of causes a few problems for them. I like Fox's band mates and how well they get along. We see what could be relationship's building in some of the band mates a well as with Molly's friends and sister. It'll be fun to see how that works out in future books.

The one thing that did bother me was the amount of unnecessary sex in this book. I'm no prude but these two go at it like bunnies and it just seemed to be over done. I like how this ended and am looking forward to reading more in this series.