You may have noticed the new picture for these posts. In case you were wondering, Ken painted the skull for me, and the playing card in his hat is a good symbol for Las Vegas with all the gambling here.
This is a new weekly blog post that I'm calling Apartment Hell  Life. I've mentioned a few times some of the crazy things that go on in and around my apartment complex in the past 20 years that we've lived here and people keep telling me I should write a book. But instead of a book, I've decided to share the crazy things that have happened in and around my apartment complex in the last 20 years here in a weekly blog post.

Back in August of 2017 my mailbox got bent and almost broken. 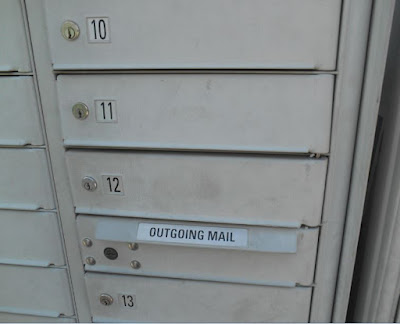 My neighbor's son messed up the mailbox. Ken and I were so pissed off that day so we both went outside to take pictures of the mailbox and confront the neighbor about it. The woman next door who had 'customers' knocking on my window at 3 am looking to buy drugs had 3 kids. The oldest I believe was about 12. We have one of those centralized panel mailboxes that apartment complexes have.  (My mail box is #11 and her's was 12) Her mail box had been broken since she moved in and the post office is slow to fix anything.

So Ken confronted her and asked her if she or someone else tried to pull, push or pry their mailbox. Her oldest son speaks up and says he was pulling on it and prying it trying to fix his mom's mailbox. Ken told him that in doing so he messed up our box which is right on top of theirs and she starts going on about how other boxes have been broken into that we should go look and see that other boxes are broken too that someone else probably did it even though her son just admitted that he did it. So we went and looked, took pictures. Nope, it's just hers and mine that are bent and messed up. We actually looked when taking the pictures and all the other boxes are flat against the face of the panel like mine used to be. Only mine and hers are sticking out crooked now. Thankfully she moved out soon after this happened that year. 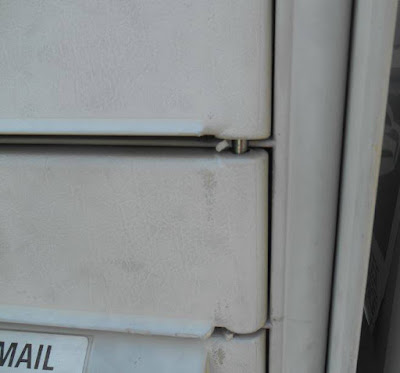 You can see the little piece that's bent and about to come off under my mailbox. 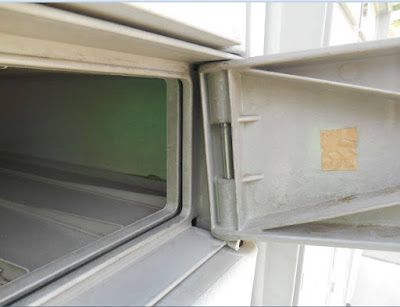 My mailbox actually sticks out more than it should now. I can open and close it but I need both hands to push it in and hold it there while I turn the key in order to get it open or closed.

We made a complaint with the manager in the office and she told us there was nothing she could do because the mailboxes are property of the USPS so they have to fix it.

It took days for me to get a confirmation from the post office and finally from my postal carrier that there was a work order put in and it would be fixed at some point. The bottom of the box has been pried out and it's really hard to open and close. Even though I've called so many times I've lost count to find out when it will be fixed and they tell me soon, but I won't hold my breath. It's now been over a year and it's still not fixed. The last time I called the post office they told me they'll get to it when they get to it because there's only one maintenance crew for all of Las Vegas and they are busy. I won't hold my breath. It's a good thing that I can open and close it at all because I doubt that the USPS maintenance crew will ever come out and look at it. The mailbox above mine won't even lock now so they don't use it, the person that lives next door to me has to have all of his mail delivered to the office now and pick it up with the manager. The maintenance crew hasn't come out to fix that mailbox either.

And this week the neighbor across from me that moved in about 2 weeks ago was fighting with her boyfriend. I look out the door and she is standing on her doorway...naked. She was putting her clothes on in the door way while she yelled at him and called him names and told him he was a stupid drunk that she's not marrying. I could not get my camera in time to catch any of it before they shut the door.

A few minutes later I had to call 911 because they started fighting and she was yelling for someone to call 911 for her. But right before the police got here she took off, he went back inside and locked the door and then refused to answer it when they knocked. So the police left. She came back that night.