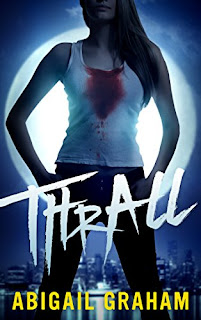 “This is what’s going to happen. You’re going to run, and I’m going to chase you.” I've spent a lifetime hunting her, years of frustration, near misses and lost chances. Now I have her. Alone, cornered, and desperate. There will be no escape for her this time. Nowhere to run, nowhere to hide. She's finally mine. I just hope I can save her. --- I have no memory of my past life. Not even a name. All that remains is an aching sadness when I see the spot on my finger where a ring used to be. Now I'm not even human, if I ever was. I sleep like the dead through the day, and at night hunger drives me to hunt and kill. My prey are the worst humanity has to offer, but who is the real monster when I slaughter them like animals for their blood? Until him. Now I'm the hunted. He's stronger, faster, I see my own hunger reflected in his eyes...

This is a different kind of vampire story, first off the vampire is a female named Christine. She doesn't remember her human past and has no idea how she became a vampire. She kills bad guys to feed and she's cold, calculating and brutal in her enjoyment of the kills she makes. It almost feels like she thinks she's doing the human race a favor by killing the dirt bags. But she's very sure of herself when she goes out to pick someone to feed on, that is until she's captured by a mysterious guy and held against her will.

This guy makes her remember who she was and how she became a vampire. He calls them nosferatu but if you ask me, it's just a vampire. We find out what the vampire did to her and it's not pretty, no wonder she doesn't want to remember that time. It takes a while before I could figure out why this guy was holding her captive and making her remember her past but when the big reveal comes about, it's bitter sweet, quite sad actually.

This story was not what I was expecting at all. It's not your typical vampire romance but there is some romance in this book, don't worry about that. It just takes a little while to get to it. It was quite an interesting story and I did like the ending.