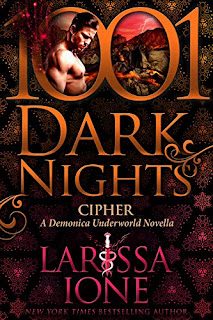 It’s been seven months since Cipher, an Unfallen angel who straddled a razor thin line between good and evil, woke up in hell with a new set of wings, a wicked pair of fangs, and a handler who’s as beautiful as she is dangerous. As a laid-back cyber-specialist who once assisted guardian angels, he’d been in a prime position to earn back his halo. But now, as a True Fallen forced to use his talents for malevolence, he must fight not only his captors and his sexy handler, but the growing corruption inside him…before the friends searching for him become his enemies and he becomes his own worst nightmare.

Lyre is a fallen angel with a heart full of hate. When she’s assigned to ensure that Cipher carries out their boss’s orders, she sees an opportunity to take revenge on those who wronged her. All she has to do is appeal to Cipher’s burgeoning dark side. But the devastatingly handsome fellow True Fallen has other ideas — sexy ideas that threaten to derail all Lyre’s plans and put them in the path of an approaching hell storm.

Danger and desire explode, even as Cipher and Lyre unravel a sinister plot that will fracture the underworld and send shockwaves into Heaven itself…

While you could read this as a standalone, I think it would be better to read the series from the beginning because a lot of this story is a continuation from the series and you won't really know what happened before this point.

Cipher gets cocky and strays a little too far from his friends when he's dragged to hell and becomes a True Unfallen. He doesn't want to be evil or help his captors but he has little choice unless he can somehow get away. He knows his friends are probably looking for him but the bad guys want him for his computer skills. So unless he gives Bael what he wants, he's gonna keep being tortured. The torture is bad and we see a lot of it right up front.

Lyre is a fallen angel and is assigned to be Cipher's handler. She's not exactly what she seems and knows she made a bad decision coming to work for Bael to get revenge for losing her angelic wings. Both Lyre and Cipher end up wanting some of the same things and they agree to work together to escape. But before they can, Cipher has to do the one thing he didn't want to do and Lyre is going to help him. While they are trying to escape they become closer and find they're attracted to each other which leads to some fun times between them, even if they are fighting for their freedom.

There are a few surprises and a couple of great twists. Bael and his brother have a secret that became a great twist by the end of the book. I love when something happens that I never saw coming and makes me want the next book right now so I can see how it will play out.

So much happened and we see a few characters that I love from this series pop up which I really loved. In the middle of everything else, there's a plot going on behind the scenes with the bag guys that could change everything and by the end of the book we get a small glimpse into the next book in this series. I can't say much more without giving away a lot of spoilers.