Review: The Rookie by Abigail Owen 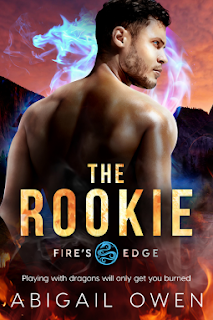 To escape exile, Aidan Paytah has had to prove himself worthy. Every second of every damn day. He fought with everything he had to earn his precarious place on the Huracán team of dragon shifter enforcers. He can’t fail or afford distractions, no matter how temptingly sweet. Total loyalty to the clans and dedication to his team is the only way.

Sera Morrison lost her parents and her husband in short order, leaving her a single mother running her family winery alone. Nothing could ever have prepared her for the discovery that she’s a destined dragon mate. But once she finds out, there’s only one man she wants—the one who walks away.

However, the Alliance Council has its own agenda. They want to use her as a political pawn and force a mating that could ultimately kill her in order to save the High King. Aidan has no choice but to kidnap her, even if it means their close proximity reinforces their own mating bond. And mating with him could end up being a far worse fate for Sera….

The Mating Council helped women who were destined to be dragon mates. But not all dragons thought they were a good idea or were doing the right thing for the women. The Enforcers reported to the Alliance Council who governed the dragons.

Sera is a single mother with a young son. She also ran a winery and Aidan was very much attracted to her. He thought about her all the time. Sera and Aidan had dreams about each other all the time but they didn't realize that they were having the same dreams, almost like they were in each others dreams. They're both battling their feelings for one another until Aidan realizes she's a dragon mate.

But because she could possibly be the High King's mate, the Alliance tries to force a mating between Sera and the High King in order to save his life even though mating with the wrong dragon will kill her, literally. But someone surprising steps in and offers her his help if she wants it.

I cannot believe it took so long for these two to see what was right in front of their faces. But Aidan thinks there's no way that Sera can be his mate because he's an orphan and there's no way he would be given such a gift above some of these other dragons.

I really loved this book so much. The dragon shifters are really great and I really loved getting to know Aidan and Sera. These two really were made for each other even though it took them way too long to figure it out. There are a couple of outstanding twists towards the end of the book that made me tear up and also made me smile. I've now read 2 books in this series so far and I plan on reading more for sure because I'm loving these books so damn much.

Disclosure: I voluntarily read and reviewed an advanced copy of this book via NetGalley but all thoughts and opinions are my own.
Posted by Mary Kirkland at 12:00 AM