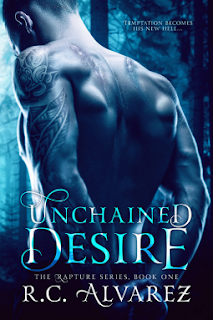 Chained to a demon queen for hundreds of years, fallen angel Ramiel has given up on his brothers and sisters––and humanity. He has seven days away from hell to replenish his power and that’s all he cares about––right up until his meeting with the much too innocent Kyria. He fell for that act before and it landed him in hell, he won’t be making that mistake again.

To save her sick father, Kyria knows she must find Ramiel. He’s dark, brooding and everything Kyria should be scared of, but the haunted look in his eyes makes her think there’s more to him. The tattoos and chains don’t frighten her either, but the connection she has with him does. When strange creatures attack her, Ramiel steps in to protect her.

Ramiel believes he’s reluctantly helping Kyria, but what neither of them knows is that she may be the one to save them all...

Kyria and her father had been on the run from the cartel even since she was a child and the cartel had killed her mother. But now her father is sick and she had to be the one to find this mysterious Ramiel that her father was always talking about.

Ramiel was only given 7 days a month out of hell in order to restore his holy essence, after that he is dragged back to hell by the demon who held him captive. The demon used his blood for experiments and there is no end in sight to the torment.

Kyria sets out to find Ramiel when her father gets sick, but when she finds him he wants nothing to do with her until she finds herself in danger. For whatever reason when Ramiel senses Kyria is in danger, he comes to her rescue and lets her in on a few secrets. There's a whole other world of beasts out there that she never knew about and now that they know she exists, they'll be coming for her and her father even more than ever. By the time they get back to the motel room where her father was, he's gone and they set out to find out what happened to him.

Kyria and Ramiel go back to the ranch she and her father had been living at for a few years where she finds out that the people she thought she knew, were keeping a lot of secrets from her. A huge twist is revealed and Kyria finds out what she really is. On their journey to find Kyria's father they come in contact with some of Ramiel's family when he needs help. While searching for her father Kyria and Ramiel become a lot closer than either of them had plans to. Their romance was sweet, and sad in part to Ramiel having been tortured for so many years in hell. But he's such a great guy even if he didn't realize it after having been beat down for so long. There was a lot more to this story than I first thought which made it a real page turner.

I received an ARC from Netgalley in exchange for a review but all of my opinions are my own.