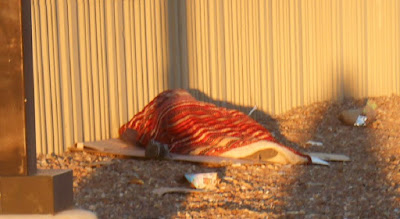 I was walking Falcor the other morning when I saw this blanket move. Scared the bejuju's outta me too. Then I saw the guys face. It was one of the meth heads that used to hang out at the drug dealers apartment before he got kicked out. He laid down cardboard on the rocks and laid on that with his blanket. I thought it was just a pile of blankets or rugs or trash there and then it moved. Damn, scared me half to death. 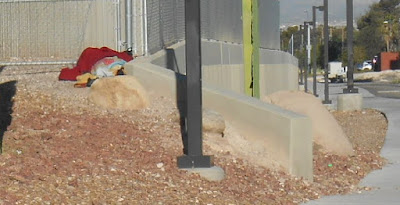 The the next day he moved and was sleeping a little further down the path. He's been hanging out across the street where some of the other drug dealers live. I found him passed out in front of a parked car about a week ago. Falcor barked at him and he woke up but was so high or drunk he couldn't even get up. The apartment manager has called the cops on him twice now but they just make him get up and move. One day he was so high and couldn't walk so the police called an ambulance and he was gone for a couple of days but he's baaaack. #DontDoDrugs

On Thursday our apartment manager finally opened the swimming pool. One of the women from across the street decided she would take a dip and that didn't go over well with the manager who told her she had to get out and leave since she doesn't live her. The woman apparently told the manager, "You don't have to tell me to get out of the pool, I live on this street." The manager made her get out and leave and she must have told the people in the courtyard where she lives because they were over there across the street screaming at my manager calling her a bitch, that they should be able to use the pool. lol

I suggest you go take a cold shower because the manager ain't letting you get in our pool. She closes the pool and locks the gate right before she leaves at 5pm and because she's not here on the weekends, the pool isn't open then either. Now she said that you'll have to come in the office and sign in and show that you're a resident before getting in the pool. The pool in in the same courtyard as the office so she see's everyone that goes in it.