Review: My Liege Of Dark Haven by Cherise Sinclair 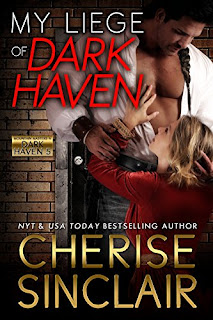 Xavier’s new receptionist is striving to keep an emotional distance, and he’s intrigued. Although she’s intriguingly intelligent, beautifully submissive, and sweetly vulnerable, her defenses keep her on the fringe of life. As he draws her into truly participating, she, in turn, begins to fill his world.

Ever since meeting Xavier, Abby questions everything she believes about herself. She’s falling for the stern owner of Dark Haven, and he’s beginning to care for her…until the day he learns why she’s in his club.

Xavier *My Liege* is big, formidable, intimidating and awesome! He takes a liking to Abby and even though he doesn't do relationships ever since his wife passed away 4 years before, he can't stop thinking about this woman. I really liked Xavier and Abby together and I liked the camaraderie of most of the people at the club. They really did seem like a big family or close friends. I guess you really get to know someone when you're all getting hot, sweaty and naked together. *Wink*

I'm not gonna lie though, for all the fun and great times I had with this story there were a few times that the story got real uncomfortable for me. Reading about someone being in pain or being humiliated is just not my thing.

I did enjoy this story and was surprised it had somehow slipped through the cracks when I was sure I had read it at some point.