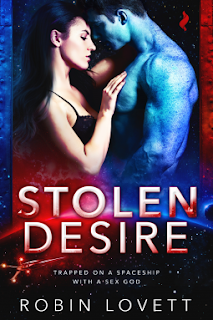 Koviye
My people call me the Sex God, but I, Koviye of the Fellamana, am so much more. I read their every desire and satisfy them with a mere touch of my hands. I’m sworn to share my powers, and this thing humans call monogamy is biologically impossible for me, or so I thought until I met the human, Jenie, Lieutenant General in the rebellion against our mutual enemy determined to destroy us. Now, as though Jenie has some power over me, I cannot think of touching anyone but her.

Jenie
I’ve dreamt of Koviye every night since I landed on this sex planet where every breath I take is an aphrodisiac to my blood. I am not fully human, I am part alien, and the planet has awakened my body’s instinct to find a mate. The next person I have sex with I will form an attachment for life, which is impossible for the Sex God. I have a rebellion to lead. Mating a polyamorous alien would ruin me. I can never have him, no matter how much I burn for him.

But I need his help. My best friend was taken prisoner by our enemies, the Ten Systems, and the only person with a ship fast enough to save her is Koviye. And all those dreams I’ve been having about him aren’t just dreams, he tells me. They’re real. He can dream walk, so if I can’t have him while I’m awake, at least I can have him in my dreams—as if that will ever be enough.

Each book in the Planet of Desire series is STANDALONE:
* Toxic Desire
* Captive Desire
* Stolen Desire

This is the 3rd book in this series but this is the first book I've read. It says that each book is a standalone so I figured I would give it a try after reading that description. I was able to pick this book up and read it and not feel confused.

Koviye lives on Fellamana and the planet itself exudes some sort of toxin that will slowly poison you if you don't have sex frequently. But Koviye is special on this planet because he has a special talent of a healing touch, so he is sought after. The people on this planet have sex frequently and with whomever they want. They don't believe in monogamy and neither does Koviye. He doesn't see that as even a choice for him.

Jenie is half human and half alien. Since she is half alien it's her alien side that will require her to choose a mate at some point, sex will secure the bond with her mate and her species of alien mates for life and it's monogamous. She knows that being with someone like Koviye who can never stick to just one mate would destroy her. But the toxin on the planet starts to work on her and turns on her body's instinct to find a mate. The only problem is she's attracted to Koviye, a male that she can never have.

This starts off on an alien planet and ends up in space which was fun because so many interesting things happen while they're in space. I had a really good time with this book and plan on going back and reading the first two books because I want to see what else happened. This book was hard to put down and I love finding a book that I love so much I don't want to stop reading long enough to do anything else.