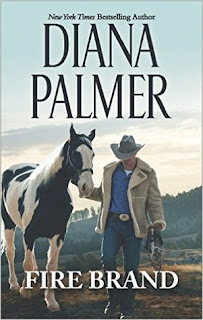 Gaby Cane was always a bit afraid of her attraction to Bowie McCayde. Even when she was fifteen and Bowie's family took her in, she had sensed his simmering resentment. Now ten years later, she's an aspiring journalist who can hold her own with any man professionally, the dark shadows of years gone by far behind her. Then Bowie strides back into her life—only this time, he needs her, and the pull of loyalty to his family is too strong to ignore.

When Bowie asked Gaby to help save his family's Arizona ranch, he never expected the girl he once knew to return transformed into a stunning, successful woman. As they work together, Bowie is shocked to find that her innocence and beauty stir a hunger he can't deny. But the rogue rancher can sense something holding her back, and he's determined to uncover the terrible secret Gaby is fighting to keep hidden…

Gaby was taken in by Bowie's family when she ran away from her life because something bad happened. Bowie kind of resented her because his mother showed her all the love that he never really got. Now Gaby is a journalist and Bowie needs her help to save his ranch and his mother.

At first these two did not get a long at all. Gaby has some huge walls put up because of something that happened to her in the past and she's not comfortable around men who get too close or show they're interested in her. Bowie needs her to come home with him and make sure his mother isn't making a huge mistake with the new guy in her life. Bowie thinks the new guy is a gold digger and just after her money or maybe the ranch and Bowie needs help to change his mother's mind about the new guy.

While Bowie and Gaby are there they get closer and Bowie tells her he's interested in her but even though she's attracted to him she freezes up when he gets too close. He realizes that she's never had a real relationship and that there's more to her fear than just being new to it all. It takes a long time for her to trust him but he was good at seduction for the most part. Watching these two get closer was fun but he did mess up a few times because he was out of his mind in lust *eyeroll* and had a hard time stopping himself a couple of times. That was the only thing that got on my nerves and took away from the story a little. I mean, he knew she was afraid for some reason and yet he's gonna let himself get all hot and bothered so much that he pushes her farther than she's ready for and he has a hard time stopping when she says that's enough. C'mon, have a little self control.

Gaby's past catches up with her and she thinks that her life is over but things are a little more complicated than we first thought and it's a little sad to find out everything that happened.

But if you're like me and have read enough Diana Palmer romances, you already know that this is her recipe... naive innocent, brooding rancher that has little self control and a little danger thrown in for fun.

I really liked Gaby and Bowie for the most part as well as the secondary characters of Bowie's mom and her new beau who is more than he seems. I really like Diana Palmer's books and will continue to read them even though this one wasn't my favorite.