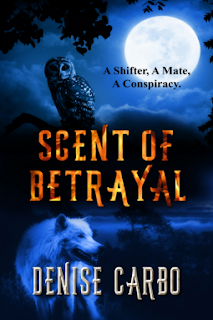 Wolf shifter, Davis Campbell is on a mission. His job is to babysit a woman from a rival clan. He believes all he has to do is get her back to Scotland. What he doesn't figure on is her possibly being his mate. Bethany Leitner, an owl shifter, has been betrayed, attacked, framed, and left for dead. Trust in herself and others is hard to find. So when her self-appointed guardian begins to bark orders, she is ready to show her talons.

Davis volunteered to escort Bethany back to her clan because he wanted to see what was happening in the this other clan. Bethany's clan hadn't voted in a new leader after the old one had been killed when Davis got her home and there were two guys who wanted her vote but she kept her allegiance to herself. Her cousin Aaron was a real jerk and seemed to want to belittle and boss everyone around. I don't know why anyone would vote for this guy to be their leader. Heyes seems nice but I wasn't sure if he's up to being the leader. When Davis reports back home that things are unstable there, he's ordered to stay from his leader and report back to his clan what's going on. Aaron is not happy to hear that he'll be staying for clan business but there's nothing he can do about it.

When Bethany finds herself in danger, Davis decides that he is her protector and stays with her in her flat which is small. Having them in such close quarters and around each other all the time made them face the facts that they were attracted to each other. It's not long before they are acting on their attraction and they both figure out that they're mates. Not knowing how the other feels about that little shocker revelation makes things a little awkward.

Davis is a wolf shifter and Bethany is an owl shifter. I've read plenty of wolf shifter stories but not many with owl shifters in them so this was interesting. Someone keeps trying to kill Bethany but she has no idea why or who it could be. I didn't have a clue who could be trying to get her out of the way until the culprit was uncovered. It was a surprise to me for sure. There was a nice little twist at the end of this book that really made the story better and I loved how this ended.

Disclosure: I was given a free copy of this book via NetGalley but all thoughts and opinions are my own.
Posted by Mary Kirkland at 12:00 AM