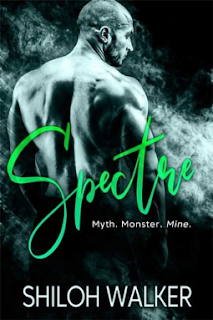 I wasn’t even a man when I took a life for the first time, although you couldn’t say I was a child. If I’d ever had a childhood, it hadn’t lasted long. My father, may he rot in hell, had seen to that. I took his life as well and that, too, happened before I was old enough to be considered a grown man.
I never regretted it for a second.

That path almost led to my own grave, and would have, if I hadn’t stumbled across somebody who was as different from my father as day was from night. Sarge had seen the monster lurking inside, so he took control, gave me guidelines, rules, so I wouldn’t be the monster my father had planned.

It worked. I restrained the worst of my rage and honed the skills that had been drilled into me—theft, stealth… assassination. The broken child ceased to exist and I became Spectre, an assassin spoken of in whispers, hired to take out the worst of humanity.

Then I was sent to kill her…and my world came to a screeching halt.

It’s taken a long time, but I finally had a nice, steady routine. I stopped trying to conform to the neurotypicals of the world and found my own normal.

Normal went out the window when I walked into my kitchen and found a strange (hot), dangerous looking (so fricking hot) man drugging my new dog.

It probably wasn’t the smartest thing to leap at him like a banshee and attack, but that’s what I did.

When my attempt to wreck the vehicle was averted, my kidnapper didn’t hurt or threaten me. In fact, he told me he wanted to protect me.

This (hot) guy had to be crazy. But if he was crazy, what did that make me? Because I believed him. More, I found myself seeing something beyond the rigid, blank mask he wore. He kept trying to push me away, but I couldn’t seem to keep my distance.

He calls himself a monster…but when I look at him, that isn’t what I see. I just see him…and I know he’s meant to be mine.

Spectre starts out with a crummy hand in the childhood and family department. I really felt for this kid who was raised by a sick man. He runs away and finds himself with Sarge, a man who saved him. We don't get to see near enough of their life together but Sarge stopped Spectre from becoming the monster his father had wanted him to be. Spectre is now all grown up and is a hired assassin. He's contacted to kill Tia so he watches her and learns about her but he knows that she's an innocent bystander, just a way for the guy who's trying to hire him to get back at her brother. He might be a hired killer but he isn't completely without morals so he kidnaps her to save her life. Meric/Spectre is an intense. dark, lethal assassin but he also shows another side of himself which made this book so fun to read

Tia has Aspergers and teaches an art class for kids who also have it. Her brother is a cop who put away the brother of a really bad guy and now he's coming after Tia to send a message to her brother. When Tia's brother tells her that she might be in danger, she doesn't think so because almost no one even knows of her. But when Spectre tries to kidnap her she fights tooth and nail to get away from him at first. It's later that she realizes that while he's a hired killer, he might be telling her the truth about not taking her to the bad guy.

When I read the blurb for this and saw that he had a 'monster' inside him that he kept caged, I instantly thought that he was some kind of shifter, vampire, or other type of monster. It never occurred to me that he meant he was just a plain old human that just wanted to kill people sometimes. LOL

I don't blame the author for the misunderstanding though, I just have shifters or vampires on the brain from all the paranormal romance I read. So imagine my surprise when I started reading this and could not put it down! It's a good thing I started this in the morning because I would have gladly stayed up most of the night to finish this book. It was impossible to put down. I was completely and thoroughly absorbed in this story and really wanted to know what would happen next. There were a few really good twists or turns that I wouldn't have thought this story would go.

Because Tia has Aspergers, she is different and reacts differently than he expects her to in some situations. She surprises him and once they are stuck together for a while getting to know one another, she makes him feel things that he never thought he would. With her, he can actually see a future that doesn't involve him being hired to kill people. I didn't know how that was going to work out or how this would end but when people want to change, they make it work. The characters in this story are different from most other romances that I've read. This isn't a touchy feely type romance at all, except for how these two feel about each other. But make no mistake, this is a dark, erotic read full of characters who would kill for the right reasons.

This book ended up surprising me in a good way. I highly recommend this book.

Disclosure: I was given a free copy of this book via NetGalley but all opinions and thoughts are my own.
Posted by Mary Kirkland at 12:00 AM