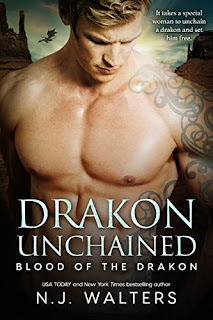 Victoria Marshall is living a lie. She works for a member of the Knights of the Dragon, a secret society that traps and uses dragons for their own gain. As a child, she made an unlikely friend—a drakon. He went missing, and she’s spent the past twenty years searching for him. The only thing distracting her from her mission is Luther Henderson, her boss’s new head of security.

Luther is also living a lie. One, if discovered, could lead to a fate worse than death. He’s attracted to Victoria, but can’t fully trust her, doesn’t know if she’s truly innocent or a true member of the Knights. It’s not only his life at stake, but those of the people he loves.

As they’re thrust deeper into the dangerous dealings of the Knights, they each have to share their secrets in order to survive.

Victoria met a Drakon when she was a child and has visions but no one believed her. She's been looking for him her entire life because she has visions when she dreams and knows that he's being held captive somewhere. She took a job with some scary people because she knows that they can lead her to Sergei so she can help him escape somehow.

Luther has his own reasons for working for Temple, he's also looking for Sergei but for personal reasons and doesn't know what to think of Victoria other than to know that he's very much attracted to her but he just doesn't have time for a relationship at this time.

Watching these two characters get to know one another, get closer and trust each other with their secrets was so much fun.

Temple needs to find someone with a Drakon because the one that he had got loose and now he's aging again. So he reaches out to another guy that he knows has been keeping a Drakon captive for a long time and they meet for a meeting. Both Victoria and Luther have to trust each other if they are going to free Sergei but Luther is keeping a few secrets that could make things interesting.

Drakon's are the offspring of dragons and humans. Dragons came to Earth around four thousand years ago and had offspring with human women. The offspring are called Drakon's. They can shift into dragons, fly, are stronger than humans, live a very long time and if a human ingests their blood, they live longer and it cures any ailments they have. So there are bad humans that capture and hold captive these Drakon's so they can use them for their blood.

I've been really enjoying this series so far and plan on reading more as they are released. And I loved that some of the other Drakon's from previous books make an appearance in this one. It's always nice to catch up with familiar characters. This book is filled with suspense, action, romance and dragons (drakon's). It was great.