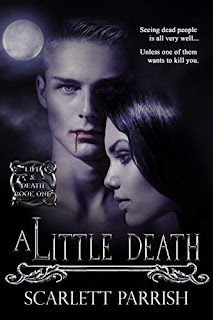 Seeing dead people is all very well...unless one of them wants to kill you.

To Mallory Sharpe, vampires are a fact of life. They exist, walk the streets and for the most part mind their own business. As a second-year university student, she doesn’t pay the undead much attention until she meets Jonathan Cutler. He has needs, and blood is only one. The other, Mallory is more than willing to help him with. After all, he has but one rule, to never spend more than one night with a woman. He won’t get attached, or consciously put anyone’s life in danger.

Another vampire, Cian Ambrose, isn’t so troubled by conscience. Mallory’s fair game, a weapon with which to taunt Jonathan. In fact, it might be fun to make her his grail, or living blood donor, and Cian Ambrose doesn’t take kindly to the word no. He hasn’t heard it often in his one hundred and fifty years and it usually results in the other person ending up dead.

So with Mallory’s tolerance for undead guys running very low, Jonathan has to regain her trust, stop Cian killing her, oh...and for God’s sake, not fall in love.

I absolutely love a vampire romance where the vampire starts out sexy, seductive, flirty and just a little dangerous and that's exactly what I got with this book.

Mallory goes to a bar with one of her friends and spots a vampire at the bar where everyone seems to be giving him a wide berth. So when she walks right up to the bar and orders her drink while standing next to him, he smiles and asks her if she's scared to be standing next to a vampire. At that point I was just hooked. Mallory is fun, witty and out to have a little fun, even if it is with a vampire. Vampires are known to the world in this book which made it fun not to have to hide what they are and be spotted and afraid of them when some people see them, like at the bar. But Mallory isn't afraid which made the first meeting fun.

Jonathan was at the bar to find a willing woman to go home with and Mallory was all too willing so they end up in her bed. They were so good together but he has a rule about being with a woman only once and not getting attached so when he left before the sun came up she didn't think she would see him again.

Cian is another vampire who seeks out Mallory after he realizes that Jonathan has some kind of feelings for her but won't act on them. So he sets out to spend some time with Mallory just to get under Jonathan's skin but Cian is dangerous and Mallory kind of knows it. Cian is a bad guy, there's no getting around that fact and he's persistent in a creepy way. But Jonathan cares more and feels more for Mallory than he first lets on so he tries to keep her safe. But Cian is never going to stop and Jonathan knows it. Cian brings an element of danger that just added to the story and brought Mallory and Jonathan closer together.

Personally I think Jonathan should have just killed Cian because he was a menace and wouldn't leave Mallory alone. I really liked the ending of this story and I absolutely loved Jonathan and Mallory, they just fit together so well. This is my first time reading this author but I thoroughly enjoyed this book and highly recommend it to anyone who enjoys a good vampire romance.