Review: Sins of a Highland Devil by Sue-Ellen Welfonder 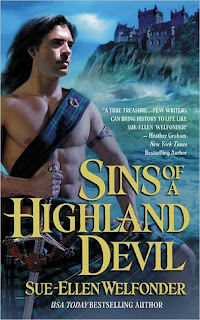 The first book in the Highland Warriors trilogy, in which three heroes make a pact to insure that a rival clan does not take over their Glen of Many Legends. At the same time, three women plot to marry these heroes to insure peace.

In SINS OF A HIGHLAND DEVIL, James Cameron is concerned when the King's decree states all three neighboring clans must have a battle to the death in order to lay official claim to the scared Glen of Many Legends. James attempts to make a pact with the heads of the other clans to fight this decree. But he ends up fighting his own fierce desire when coming head-to-head with Lady Catriona of the opposing MacDonald clan, who has her own plan for peace.

I am a sucker for a supernatural element in a story so when I won this story in a blog giveaway I was excited to read it even though I don't read a lot of historicals.

When Catriona learns of the King's rule that the three clans will have to fight for the right to reign over the glen, she knows that she has to do something or many people will be killed but she isn't the only woman who decides to do something. James and Catriona don't get along through most of this book but they do have the hots for each other. The three clans don't really want to fight it seemed but they don't see any other way around it. But it doesn't happen right away so James and Catriona have some time to get to know one another better.

I loved Rannoch the mystical stag even more than the romance between James and Catriona. The romance between the hero and heroine was hard going even though they had sex and had the hots for each other. I didn't feel like the hero really cared about her. He felt a bit flat emotion wise to me so it was hard to see these two really working out until the ending.

I did like the secondary characters maybe even more than the lead characters in this story. The supernatural parts of this story were more fun for me than the rest of the story but the entire thing was a good read.