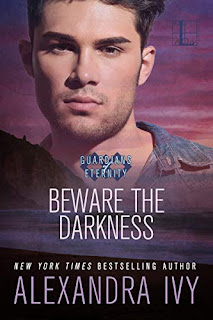 The enemy may have changed, but the battle between good and evil burns hotter than ever in this scintillating new installment in Alexandra Ivy’s Guardians of Eternity series.

There is only one thing more precious to vampire Tarak than his newfound freedom after five centuries of captivity, and that’s the promise of revenge. At last, he can destroy Riven, the merman who has drained his power in order to make himself king. But at the very moment when justice is a fang’s breadth away, Tarak’s quest is complicated by the beautiful mermaid princess who kept him sane and fed during his ordeal.

Waverly hoped that once Tarak escaped, he’d return to his own kind and enjoy the rest of his immortal life. She also hoped she might one day stop dreaming about the darkly handsome vampire. Instead, Tarak’s return draws Waverly into an unlikely alliance—and a passion that eclipses all her fantasies.

Hatred for Riven has sustained Tarak this long. But only Waverly’s love can give him the strength to claim eternity with her . . .

Tarak was about to tell his people something bad about their leader but before he could he's handed over to Riven and held captive for 500 years. Only Waverly came to help him get through the time in captivity and feed him her blood. But she didn't realize that by feeding him her blood, she was making Riven more powerful. Now that Tarak is no loner imprisoned, all he wants is revenge on Riven but Waverly ends up being more to him than just a way to get that revenge.

Riven was the leader of the Mer-people. He was the one that was able to use the royal trident (Tryshu) but Tarak suspected that he was only able to use it because of a spell so he and Waverly set out to prove that and get the royal trident out of his hands. While they are trying to stop Riven, they get closer and realize that they feel a lot for each other. The romance was not instantaneous but it was great. I loved seeing a very grumpy, revenge seeking Tarak become the gentle, loving, hero of this story.

I really liked a lot of the secondary characters along the way in this book as well. Inga, an ogress who helped put a spell on the cell Tarak was held in for so long was an interesting character. Styxx is the new leader of the vampires and has his hands full with tracking down Tarak and helping him but he was an interesting character as well. The huge twist that happens towards the end of this book was great! I never saw that coming but it sure put a smile on my face. I loved the ending to this story.