Review: Bring Me To Life by Scarlett Parrish 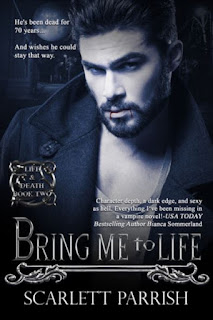 Nathan Stephenson died seventy years ago and he’d like the world—or at least one person—to think he stayed that way.

In 1940s London, Sergeant Nathan Stephenson ignored his rank and the expectation that he’d wait for the war to be over and find a nice girl to settle down with, and took a lover. Not only was Cian Ambrose unashamed of his bisexuality, he was also proud to be a vampire. Back then, he was certain that his and Nathan’s relationship would last forever, refusing to take no for an answer.

One evening, Cian went too far in his attempts to persuade Nathan to become a vampire and left a mutual acquaintance, Jonathan Cutler, to deal with the aftermath. What Cian doesn’t know is that Nathan didn’t die—Jonathan brought him back to life, agreeing to keep Nathan’s continued existence a secret.

It’s now the twenty-first century and Jonathan’s back to call in the favor. Nathan’s an honorable man and can’t say no, but the trouble is, wherever Jonathan goes, Cian Ambrose can’t be far behind…

When Nathan died and became a vampire, he didn't want Cian to know he was still alive...or undead. Cian said he loved Nathan but Nathan wasn't sure he wanted to become a vampire but Cian took the choice out of Nathan's hands and bit him anyway. So for seventy years, Nathan hid from Cian, always looking over his shoulder just in case the boogyman from his real life nightmare ever found him.

All the hiding comes to a crashing halt when Jonathan calls on Nathan to do him a favor and because he owes Jonathan for saving his life, he can't say no. Jonathan and Mallory from the first book, "A Little Death" make an appearance in this book asking a favor from Nathan. He's shocked to see them but he helps them and then goes searching for Cian. Humans know about vampires in the world this author created, so it was interesting to see vampire friendly bars and other places that were for vampires.

This book takes places in two time periods, the present and also seventy years before when Nathan was still human and had first met Cian. When I first met Cian in the first book, I gotta say I didn't like him one bit. He was scary, selfish, rude and a bit of a jerk. But I found him to be interesting and wondered why he was such an ass at times. This book helped explain why he was such a goober for the most part and I almost, almost ended up feeling sorry for the guy. I mean, he thought he killed the guy he loved. That's bound to have an effect on your personality.

Nathan on the other hand was a sweet individual. Why can't I find a sweet vampire that wants to suck on my neck? Ya know what I mean? Oh and look at that cover, I think I'm in love. So when these two do see each other for the first time in seventy years, it was shocking and Cian didn't act at all the way I thought he would. That surprised me...a lot.

It was fun to watch two vampires throw barbs at each other the way these two did. They were both pissed off and they were both hurt. It was interesting to see where that led and see what happened between them. I liked the ending and hope there's a 3rd book. I hope a reformed Cian will make an appearance in the next book as well.

This author writes the kind of vampires that I tend to like when I'm searching for a vampire romance to read. I loved this book and found it hard to put down.