Review: The Goddess Gets Her Guy by Ashlyn Chase 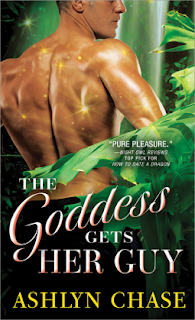 What happens when the goddess meets Mr. Right...but she absolutely can't tell him who she really is?

After leaving his job as a cardiac surgeon, Dr. Aaron Samuels needs a new purpose in his life. Wanting to help his patients even if he can't operate, he heads to the Puerto Rican rainforest to find a cure for heart disease. He never imagined he'd meet a beautiful, mysterious woman, especially not one talking to a frog in the middle of the jungle...

Gaia—a.k.a. Mother Nature—has had it with paranormals breaking her number one rule: Never reveal your supernatural powers to humans, not even your mate. Fed up, she transports to the rainforest, happy to converse with amphibians who don't talk back. But Dr. Samuels is a much better conversationalist, and Gaia can't wait to help him mend all those broken hearts he told her about.

When her attempts to help only complicate things between them, Gaia begins to wonder what would happen if she opened her heart and was honest with Aaron...and herself. Maybe her number one rule has been wrong all along...

Gaia aka Mother Nature is old as dirt and a bit grumpy. She's been yelling and talking down to so many of the paranormals that her sisters Fate and Karma decide that she needs a date. So they set up a dating profile for Gaia on a dating app. Gaia has one rule and that's for paranormals never to show their powers to humans and she's beyond sick and tired of them breaking her rules.

The dating does not go well because the men her sisters are fixing her up with are just not her type. She did find a man on her own to be friends with but there's a misunderstanding soon after they start to talk, more and feelings are hurt. Aaron is a retired doctor who has two grown daughters, one of which moves back home after breaking up with her boyfriend.

Aaron and Gaia didn't get to really know each other until more than halfway through the book. There relationship was a very slow building one and while I like a slow building romance, I also want it to advance a little more quickly than it did in this book. Between that and the fact that there were so many other storylines going on as well as a lot of secondary characters showing up in this book that it felt bogged down a bit with too much information. I think the romance in this book suffered because there was just too many other things going on.

If you've been reading the series up to this point though, you will probably enjoy this book.