Review: Beyond The Darkness by Katie Reus 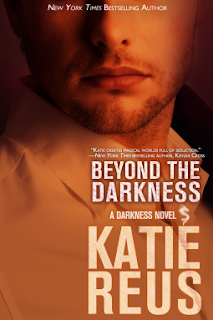 Now that she has her freedom, she’s not giving it up.

Dragon shifter Keelin Petronilla spent centuries in forced hibernation dreaming of one thing: freedom. Now she’s living life on her terms—she’s ditched her clan for an unruly wolf pack, she tends bar for a half-demon, and she’s loving it…until a powerful supernatural being targets her. She intends to handle the mysterious attacks on her own…without the help of dragon Alpha Bran Devlin. Sure, he’s sexy in that hot, scowling possessive way, but Keelin wants to live her own life in her own way.

Now that he’s found his mate, he’s not letting her go.

Former black ops agent Bran Devlin is a born dragon Alpha and leader of a fierce clan. Getting mated was never part of his plan—until a feisty dragon princess gets under his skin in a big way. But she doesn’t want a mate; she just wants to have a good time. He plays along, but when a dark and powerful being marks her for death, he’s determined to stay by her side in spite of her protests. Now that he’s found his mate, he means to keep her safe no matter what the cost…even if he has to risk it all.

Bran was there for Keelin when she was attacked a while back and he hasn't been able to stop thinking about her since. He's back in town on a mission but the fire between them is not stopping. They're both dragon shifters and he wants to make her his mate but she doesn't want that because she thinks she'll lose her freedom if she has a mate. So they just get to know one another slowly and the sexual tension was real. Even though they started out a little slowly with their first meeting when they meet a second time weeks later, they can't deny the sexual chemistry is there.

There's another secondary romance going on between Nyx and Bo. He's the owner of the bar she works at and is a half demon but doesn't originally know what kind of shifter Nyx is which made the mystery interesting.

Watching these couples get to know one another was so much fun but Bran and Keelin were the hero and heroine of this story so we saw more of them than the other two. But there's danger right around the corner for Keelin which has Bran feeling all kinds of protective for her and trying to keep her safe even though she doesn't think that she really needs his help sometimes. So when she runs off to figure things out with her family and doesn't tell him where she's going, his dragon goes crazy and stops at nothing to make sure she's safe. Seeing his animal side come out like that was sexy as hell.

The bad guys are bad, like really bad. There's kidnapping, torture and murder going on and when we find out what the bad guy is and why he's after Keelin it really ratchet's up the danger in the story. I loved the world building as well as all the different paranormal creatures that were in this book and how we know things are going to get interesting for Nyx in the future.

While this book started off a little slow for me, it sure did pick up and the story stayed crazy and engaging until the end once it pace picked up.

Disclosure: I was given an ARC via NetGalley but all opinions and thoughts are my own.
Posted by Mary Kirkland at 12:00 AM