Review: Mastered By Her Mates by Grace Goodwin 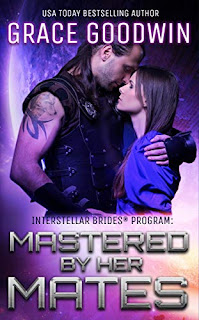 Amanda Bryant has been a spy for five long years, but when aliens suddenly appear claiming a deadly enemy threatens Earth's very survival, Amanda is asked by her superiors to accept the most dangerous mission of her life...volunteer to be an alien's bride, to share the strange warrior's bed and then betray him.

Accepting the assignment, Amanda is processed as the first Interstellar Bride and transported halfway across the galaxy to her new mate's battleship where she awakens to discover she has been matched to not just one huge Prillon warrior, but two.

Shocked by her craving for the touch of two dominant alpha males, Amanda attempts to hide her body's immediate reaction to Commander Grigg and his second, Rav. Resistance is futile as her new mates expect to control every aspect of her life, and her pleasure, and neither will hesitate to deliver a thorough and embarrassing spanking should she disobey their sensual commands, or resist a complex and deeply arousing series of medical exams designed to ensure her sexual readiness for their claiming.

Seduced and cherished by two alpha alien warriors who hide nothing from her, Amanda quickly comes to realize that the threat to Earth is very real. When she witnesses a battle with the enemy and the resulting death of a highly respected warrior, she knows she must tell her mates the truth and hope they can forgive her for her duplicity before it's too late.

Loyalties will be tested as Amanda fights the most important battle of her life. How can she protect the warriors she has grown to love and save the people of Earth from making a terrible mistake? Will her human contacts believe her when, with every touch, every look, they will see just how thoroughly she has been mastered by her mates?

Amanda volunteers for the Interstellar Bride Program after aliens come to Earth and pretty much take over, saying that they are here to keep us safe. She's a spy and her mission is to gather as much intelligence as possible for a couple of years and then leave her 'mate' and come back to Earth to fill in her superiors. But she's 'mated' with two Prillon warriors who make her feel like their relationship could work.

Amanda's superiors back on Earth are also sending some soldier's who are spies as well because her superiors don't believe the coalition about the big bad aliens that are out to kill people of Earth and other planets. The Hive are the big bad and when they are described it made me think of The Borg on the Star Trek series. They kidnap people and implant them with biosynthetic machines that turn them into fighters for The Hive, much like The Borg did.

When Amanda can see for herself that The Hive is real and not just something the coalition made up to take over Earth, she knows that she was lied to by her superiors. But this is first and foremost a love story. Rav and Grigg fall head over hills in love with her and want nothing more than to keep her with them. Their culture is a little different from that of Earth but they made it work as she got to know them. I won't downplay the amount of sex in this book because there is a lot but I think it really fit with the story. What didn't fit for me was that she was supposed to be a spy. I don't really think she came off as a spy, it just didn't fit how she acted or what she did at all.

This is the 6th book in the Interstellar Brides series but it's the first book that I've read. I didn't feel like I was missing a lot of information or confused at all because I read this out of order.