Review: The Enforcer by Abigail Owen 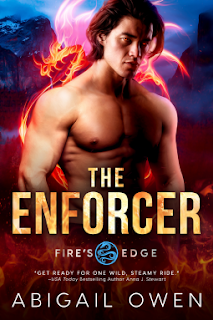 Death comes for everyone. Even Drake Chandali. The aging process that twists all unmated dragon shifters’ bodies into something useless has taken hold of his body centuries early. A mate could have reversed the process, but now it’s too late. To protect his team of enforcers, he leaves, and comes face to face with the woman he’d thought was human when he saved her from a fire months before.

Except she’s not human. She’s a mate.

Camilla Carrillo almost lost her family to wildfire. To discover she’s fated to mate a creature made of flame and rage, and become one herself, should be terrifying. But somehow a rightness settles inside her, especially when she’s around the glowering red dragon shifter who wants nothing to do with her.

When Drake learns Cami bears his mark—the same mark as the High King—he refuses to believe she’s meant to be his. It’s too late. How could he turn Cami only to take her with him to the grave? At the same time, he can’t walk away. Hiding her from the corrupt, rotting High King might be the last honorable thing Drake ever does with the little time he has left.

Drake is a dragon shifter and he's dying because he hasn't found his mate. When a dragon shifter doesn't find his mate, he eventually starts to get weak, sick and die. The process started earlier than it should have for Drake and he knows it's just a matter of time. So he leaves his team mates and takes refuge with Rune who has been helping to keep some female mates safe.

Cami is staying with Rune and the other female mates when Rune brings Drake to stay with them but Drake is not well and very hard to get along with so none of the other people there want to help him. But Cami can see through his gruff exterior and takes it upon herself to help him while he's there. He seems to start to feel better and when she decides to leave to see her family, Drake goes along with her to keep her safe.

Drake and Cami are so different from each other but the chemistry is there for both of them. Cami is so outgoing, so friendly and warm compared to Drake. He just can't help but smile even if it's just to himself at times by some of the things she says or does around him. He's such a gruff curmudgeon but he doesn't want to let anyone get close to him since he knows he's dying. He thinks that even if he finds his mate at this late point it won't be enough to stop the disease from killing him and thus killing his mate in the process so he's decided not to even try.

But Cami doesn't let that stop her from getting under his skin and making him feel something for her. When they are with her family they get a lot closer and she doesn't want to let him just give up but she has a hard time making him see her way of things.

There are political twists going on and so dragons who are actually allies have to be in secret for now until things change or people will be killed. There's danger in this book because of this and I think that these things will get changed as this series goes on. I've read all the books in this series so far and it's been riveting, it's really kept me on the edge of my seat to see what will happen next.

I voluntarily read and reviewed an advanced copy of this book via NetGalley. All thoughts and opinions are my own.
Posted by Mary Kirkland at 12:00 AM