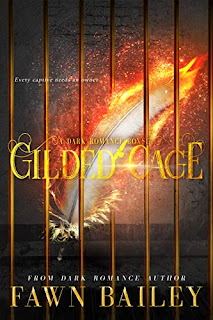 On her eighteenth birthday, Ophelia Sokolov, a Russian mafia princess, is taken.

Kidnapped by a ruthless young hitman, she lives in captivity for years. The thing she fears most is her captor himself. Yet, she finds herself falling for the monster her family created.

Years later, she must decide between the three men in her life. The one she was destined to marry, his rival twin brother, and...

The man of her nightmares, her captor himself.

Who will own Ophelia in the end?

This is Ophelia Sokolov and Kain's complete story of over 500 pages. Available for a limited time. Gilded Cage is a dark romance trilogy.

Ophelia is kidnapped and help against her will by Kain, who rapes, beats and tortures her. But with each new thing he does to her she falls a little more for him until she learns to like the things he does to her and she completely transforms into his *dolly*.

Kain is a sadistic bastard. He pissed me off on more than one occasion. I found it harder and harder to find any redeeming qualities about him. That is until we get a glimpse into what happened to him to make him the man he is today.

This is all about mobsters, their families and how they make connections with other families. Ophelia's family life growing up wasn't good and her father was a complete psycho who used his kids to make connections with other families by marrying them off to men they didn't love. Ophelia was supposed to marry Max but she was in love with his twin brother Ryker. But she is kidnapped and held by Kain who brainwashes her into feeling something for him and only him. So when she is rescued and given to Max years later and they are to be married, she finds that Max has changed and is even worst than Kain was.

Kain wasn't about to let Ophelia stay with Max and when he goes to her, she actually wants to go back with him because she loves him. Kain realizes that he loves her too so these two psychos actually become quite the couple. I thought that things would be better for her once Kain gets her back but there's a twist that really throws everyone for a loop. The mafia leaders in this story are cruel men even to their own children and when all that's been done to the kids comes out, it was one heck of a reveal. But with that reveal comes shocking revelations that they are all going to have to live with.

Kain and his *Dolly* finally seem to be happy but Kain really messes up and has to turn to Ryker for help to somehow reach Ophelia when she has a breakdown and completely shuts down. The only problem is that Ryker loves her, even the person she's become under Kain's special kind of brutality.

I won't tell you who she chooses to stay with in the end, Max, Ryker or Kain because that would give a lot away but I will say that given all the brutality these characters go through in this series, it does end with an HEA. The ending is a good one and even if I did have my doubts about this story, several times, I am glad that I read it because it ended up being a really good trilogy is a completely crazy way.

I was in the mood for something different and this seemed to fit the bill. When I saw that the trilogy box set was free on Amazon for a limited time I got it. This is a very dark romance, very dark. This trilogy was filled with mobsters, danger, kidnapping, brutal torture scenes, rape, beatings and graphic violence. If these things bother you, don't pick up this box set.

I give this book set trilogy 4 out of 5 stars.