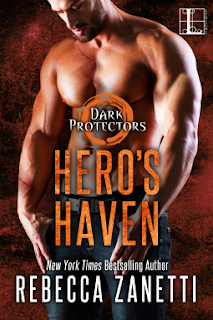 After years of struggling, Haven Daly has finally accepted that she’s nuttier than a fruitcake. Why else would she see visions of a beautiful but tormented male every night . . . and actually believe she can talk to him, even feel his touch?  But thanks to those dream journeys, she can paint images nobody else on earth can duplicate. In each brush stroke, she captures the blatant masculinity and raw desire in his eyes that promise he’s coming for her…and soon.

She’s the light that keeps him going. . .

Quade Kayrs has already suffered a lifetime of pain and torture. Completely isolated, he kept his sanity  thanks to one beautiful female, a vision with kind emerald eyes. In the end, her soft voice led him out of hell. Now, naked and alone, he’s in a strange world that bears little resemblance to the one he left behind. All he knows is Haven.  All he wants is Haven.  His final mission? To protect her from the evil hunting them both—whether she likes it or not . . .

Quade is part of a super secret group of warriors that keep Earth protected from the evil Ulric. He has spent centuries in another realm where he has spent his long life being tortured and endured unimaginable horrors. But as a vampire-demon hybrid he kept coming back to life when he died, and so he lived a long time in the hell world he was trapped in. When his world starts to collapse around him it's Haven that helps him escape and bring him to Earth.

Haven's adoptive parents thought there was something seriously evil about her because of the visions she had and her nightmares. They treated her so badly, I really felt bad for her. But she had visions of Quade for years and never knew whether he was real or a figment of her imagination.

Quade thought he would die all alone in the realm he had been for so long, but Haven somehow comes to him and pulls him to Earth when she wakes from her nightmare. Something inside Haven pulls her to where he is and when she spots him, she believes him to be a delusion. She thinks she's crazy as hell and thinks everything that happens for a time is just in her mind until he finally convinces her of everything he's been telling her.

Of course there's more than one bad guy after them which makes it harder for his family to track him down since Quade and Haven to keep moving. But once his family did find them we see some characters from previous books which was nice. These characters all have great personalities but I especially like Hope who is one of the kids and I have a feeling she'll be quite the character as she gets older.

This book is filled with danger, action, excitement and romance. I've only read a few books in this series but I love these books. I might be reading them out of order but I will get around to reading them all at some point.

Disclosure: I was given a free ARC of this book via NetGalley but all opinions and thoughts are my own.
Posted by Mary Kirkland at 12:00 AM