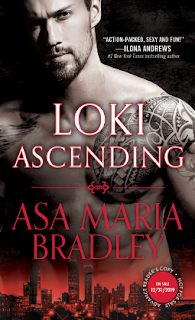 LOKI WANTS TO END THE WORLD
Only they can stop him—but at what cost?

Although Scott Brisbane is human, he's developed an inner warrior—a berserker that wants to claim Irja Vainio as his own.

Irja is an immortal Viking healer, but she hasn't used her true powers for centuries. The last time she did, someone close to her ended up dead. So instead she relies on medicine and science to protect her tribe while denying her feelings for Scott.

But the Viking warriors are falling mysteriously ill, and without magic, Irja's knowledge of healing isn't enough. When the trickster god Loki offers her a cure, it comes with a steep price that could cost Irja everything. She needs Scott's help, the man whose loyalty to the Vikings is unmatched, whose love for Irja cannot be broken—and whose inner fury has yet to be unleashed.

This is the 3rd book in the Viking Warriors series and I read the first book but not the second but that didn't stop me from diving right into this one.

Irja is a Viking healer that has magical powers she hasn't used for centuries because she's afraid she'll hurt or kill someone if she does. But when the Vikings start to fall ill to a mysterious illness that she can't cure with traditional medicine she wants to tap into her magical abilities but she soon realizes that they're gone.

Scott is a human who has feelings for Irja and doesn't know she has feelings for him too. Scott suddenly finds himself with an inner warrior *beserker* just like the immortal Vikings that he's been fighting alongside. But when he learns why he suddenly has a beserker warrior inside himself, he's shocked and so is Irja.

Loki is a demi god who wants more power and keeps sending his minions to fight and try to kill the Viking warriors because he wants to come to Earth and take over. Loki threatens Irja and she thinks he'll kill her if she doesn't give him what he wants but her connection to Scott keeps her safe time after time.

Along with fighting Loki and his wolverine minions, Irja has to find a way to save her Viking warriors who have fallen ill. Her king is off his game because his wife, their queen also falls ill but for different reasons. Poor Irja is so tired but she has so much work to do to try and find out what's wrong with the ill.

The action/battle scenes were great. It was exciting to read the battle scenes and see how well they worked together in battle. The romance between Irja and Scott and slow going because Irja didn't want to accept the fact that they were meant for each other. But I like a slow burn romance that ends with them heating up the pages.

This book was so good! I loved the first book and now need to go back and read the second book since I liked this one so much. I read out of order all the time and I really didn't feel too confused or lost while reading this book. There were a couple of really good twists with this book that I didn't see coming before they happened. I really like when something unexpected happens and it just slaps you in the face because you should have seen it but didn't.

Disclosure: I was given an ARC of this book via NetGalley in exchange for a review but all thoughts and opinions are my own.