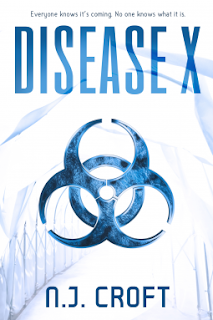 A plane carrying a Russian biochemist crashes in the Alaskan wilderness with no survivors.

A dying billionaire launches a final fight against death amid whispers of a now defunct military bioweapon: Project Snowcap.

The world's leading CRISPR virologist, Doctor Elijah Vance, hovers on the edge of a breakthrough that will alter humanity at its most fundamental level.

And in a remote village in Mexico, an unknown disease is spreading.

Following the death of his missionary parents to an ebola outbreak when he was a young child, Eli has dedicated his life to finding a cure for all viruses. Drafted onto the WHO Fast Response Team sent to lock down a possible outbreak in Mexico, he realizes that this is the big one they've been waiting for. Disease X: the unknown pathogen with the potential to destroy mankind.

It's a battle of man against virus. And we're losing. As the deaths mount and civilization breaks down, the team must race against the clock to connect the clues and uncover patient zero. But Eli is unprepared for the shocking secrets he exposes when the truth is finally revealed.

While this isn't my usual genre of book, I like the disease outbreak type of books and movies and with the Coronavirus in the news right now it seemed like a good time to read this type of book.

This book starts off with a plane crash ten years before and then in present day there are small outbreaks of some virus all over the world and people start dying. Doctors and scientists start getting more worried as more and more cases of this new virus start turning up. This book shows that a virus that spreads really fast can take over an entire village and if one person gets out after spending time with someone in the village and travels back home by plane, the results can be disastrous.

I thought I knew where this story was going but then we get thrown this huge twist and it just went in a totally different direction. Eli is a scientist and Riley works for the military and they meet in Mexico where they try and figure out how this village got infected and why once you're infected, you die. 100% mortality rate is bad, really bad and when people all around the world start showing up infected, it only gets worst. These two end up working closely together and there's even a little romance between them which I wasn't expecting in this book but I liked. Eli and his team have to find out where this virus started and how to stop it but while searching for answers, they uncover secrets they never saw coming.

This book was one of those keep you on the edge of you seat type stories and made my heart break at certain times. It's been a while since I read a book like this but I thoroughly enjoyed this one.

Disclosure: I was given an ARC of this book vie NetGalley but all thoughts and opinions are my own.
Posted by Mary Kirkland at 12:00 AM