So for the most part this week it was quiet. There were two different nights that we heard gunshots in the area and a few minutes later the police helicopter flew over my complex and the complex next door for a few minutes and then left.

One other night the police were at the opposite end of my alley because someone called to complain that the homeless people had set up their camp right next door to where their apartment balcony was. The police came and made them move. I didn't get a picture because it was night and the police were far away, about a block away and none of those pictures came out.

But on Wednesday while I was walking Falcor I saw the Fire Truck was in the Mariana's Mexican market parking lot. I got out there just as the ambulance and police were leaving but I have no idea what happened.

But my apartment complex and my courtyard was quiet this week. 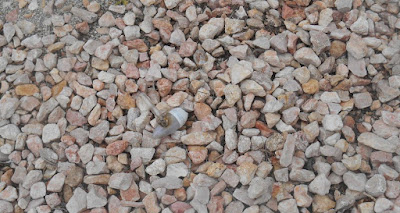 While I was out walking Falcor I spotted something in the rocks by my bedroom window. If you can't spot it, look at the next picture. 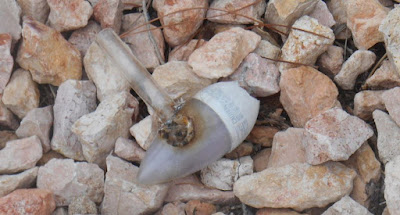 Some kind of homemade drug pipe. Not sure if it's a meth pipe, crack pipe or marijuana pipe. Looks like a crack pipe stem inserted into a plastic something. Yep, having all these druggies around here I'm spotting things like this laying around now. I went back home, got a pair of plastic gloves and a bag and threw it in the trash. I didn't want some kid finding this and playing with it. There are a lot of kids around here.