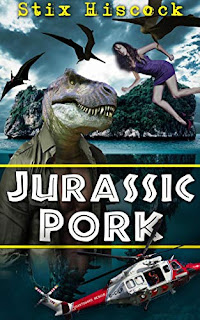 I can't even get my common-law husband to look at me these days. It's like he's so freaking busy bringing dinosaurs back to life that he can't even be bothered to look at his saucy, bodacious wife, much less to do hot sex things to me. But everything changes when he takes me along to visit his private island full of abominations to the Lord, when our helicopter crashes in the middle of the sea and my life is saved by a pterodactyl- a sexy, well hung pterodactyl at that. Now my loyalties are divided between a negligent husband who doesn't give a damn about me, and three bisexual polyamorous dinosaur studs who want nothing more than to bury their bones in me. It's a problem that every woman faces at some point in her life, but I'm so unsure whether I truly have the nads to handle it...

You know when you sign up for authors newsletters they will sometimes send you free books? Well I absolutely had to download this freebie from the link in the newsletter of Mary Auclair because the cover was hilarious and the blurb was even funnier. C'mon, tell me you didn't read that description and snort!

Dr. James Hardon and his wife Gina Moyst hadn't been intimate for a while and Gina was getting perturbed about it. But James is a dinosaur scientist and would rather work on his new experiments. James makes time to take Gina on a helicopter ride to a little island called Cretaceous Cay where most of his lab experiments lived. Now think Jurassic Park about this place because there are a bunch of dinosaurs here but there's also more.

But a huge water lizard jumped up from the water and grabbed a hold of the chopper and made them crash in the water. A pterodactyl scoops Gina up and fly's away with her. When she wakes up, there are several dinosaur/human hybrids surrounding her talking to her. Looks like James was doing more than just bringing back the dinosaurs. Several lonely dino's want to be intimate with Gina and she shows them a good time. Gina thinks her husband is dead but he comes back and she chooses the dino's over him. But once back at the lab, James makes a big decision that leads him back to Gina and the dino's.

This was just funny. Getting it on with several hybrid dinosaurs that can talk to you was something new for me. I doubt I would keep reading anything like this but it sure was an interesting change of scenery.

I give this book 4 out of 5 stars for the sheer hilarity it brought me.
Posted by Mary Kirkland at 12:00 AM