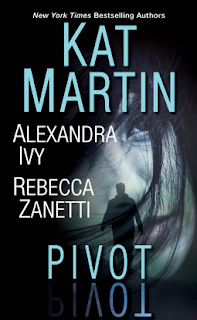 As girls, they bonded over broken homes and growing up in foster care.
As women, they’re fighting for their lives, and loves, once more . . .

MERI
When Meriwether Jones takes her young daughter and runs from trouble in L.A., that trouble follows. By the time Meri reaches Spokane, she’s out of gas, money, and ideas. Luckily, ex-cop Ian Brodie hires her to help him with his father’s farmhouse, and they seem like the answer to each other’s prayers. But Meri is keeping a dangerous secret—and Ian is in danger of losing his heart . . .

MELANIE
That secret explodes when Melanie Cassidy spots two men trying to kidnap a young boy she tutors and responds by ramming them with her car. The last thing she expects is for the man she once loved, Detective Gray Hawkins, to appear and rescue them both. Now she has no choice but to trust him as they investigate the truth about a conspiracy of dirty, drug trafficking cops—and the truth about their relationship . . .

MICHELLE
After a rough youth, Michelle Peach was finally content in Portland—until two men broke into her home, threatened her, and sent her mentally unstable mom on a blackmail spree that Michelle has to stop. The last person Michelle wants to see is her ex, Evan Boldon, a former marine turned sheriff. But Evan misses the woman who walked away instead of letting him help years ago. This time he’s not asking permission; he’s going to put a stop to the trouble stalking Michelle and her friends—and win her heart for good.

Against The Heart by Kat Martin

Meriwether tries hard to keep her jerk of an ex, Joey away from her and her daughter. While on the run she gets help from Ian who is an ex-cop. He knows something is going on with her but doesn't want to push her away so doesn't push her too much too fast but he's quickly becoming attached to her and her sweet daughter. Ian's father is a sweet old man who was lonely after his wife died five years earlier and he'd let the house go to hell. Ian hired Meri to cook, clean and keep the house his father lived in working. It was nice to see the way Ian's father changed once he got used to Meri and her daughter being in the house. But when Joey goes to one of her friends and smacks her around until she gives up Meri's phone number, things get dangerous.

Michelle is a friend of Meri's from the first story which I really liked having this tie-in to make these stories connect in some way. Meri's ex, who is an absolute jerk assaults Michelle to find out where Meri is. Later Michelle's mother comes to her and tells her she needs a lot of money but Michelle only had a couple of thousand she can give her drug addict mother. Joey and one of his goons took her tablet when he left and hew newest comic was on it. She needed the tablet back because there were other things on her tablet as well. Evan came to make sure she was ok after the run in with Joey. Her and Evan had been a thing until he joined the Marines, then they broke up. But now he was back and he wanted her but she wasn't sure she could trust her heart with him again. With the help of Evan's friend, Wolfe they go after her tablet, try to save her mother and keep from getting killed from the drug dealers chasing them.

Echoes of the Past by Alexandra Ivy

Gray helped take down Joey and Ski when they had tried to kidnap Meri's daughter, Lily from the first story. Ski now wanted to make a deal to testify against a couple of dirty cops who were selling drugs for the local drug cartel and Gray was there to make sure things went smoothly so when Ski starts getting threatening letters not to talk or his kid will be dead, Gray has to help him. Donny had escaped a kidnapping attempt and ended up at the youth center where Melanie was his tutor. Melanie saves him from being kidnapped again and then Gray comes upon the scene. Gray asks Ian from the first story to take Donny until the danger blows over. Melanie stayed with him to identify the guys who tried to take the boy.

All three stories tie in with each other since so many of the characters are friends. I liked how each story was it's own but it also included bits of the others. I really liked these stories and how the entire thing concluded. There was enough action, danger and romance to keep me reading.