Review: Under Fyre by Cara Bristol 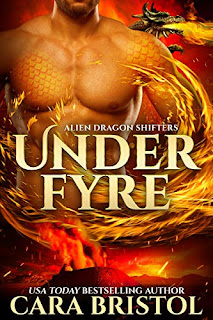 Betrayed by her people, does she dare trust a dragon?

The alien dragon shapeshifters who discover Earth come in peace—at first. Then, inexplicably, they threaten to attack. In an attempt to show goodwill and appease the dragons, Earth sends a human woman to become a concubine to one of the Draconian king’s sons, Prince K’ev.

K’ev would sooner give up his ability to breathe fire than accept a human, but when he meets Rhianna, sparks fly, and his dragon realizes she’s his mate.

Rhianna falls for the hot-blooded prince, unaware she’s a key link in a desperate scheme to defeat the dragons, a strike that could backfire with devastating consequences. Will she figure out what Earth has planned in time to save her dragon mate? And if she does, will K’ev be able to save her planet from the fire of angry king’s retaliation?

K’ev liked the human child he had met years ago because she hadn't been afraid of him but he never in his wildest dreams imagined that the same child, now an adult would be the woman sent to be his consort.

Rhianna remembers meeting a dragon when she was a child and now she's sent with her best friend who is to be a dragon's mate to stop a war between humans and dragons but her government really has something else planned that she wasn't aware of.

Draconians can smell fear, lies and other emotions so it's hard to lie to a Draconian. The Draconians had found a suitable planet that was hot enough for them, Elementa but then the humans had also arrived and started drilling which really pissed off the Draconians.

Helena was the daughter of the president and he picked her to be the consort to a dragon. But Once aboard the ship she switched places with her friend, Rhianna and let her take her place. Rhianna hadn't know her friend was going to do that so she felt betrayed because she was. Once Rhianna had agreed to say she was Helena, the real Helena had rushed off the ship, into a car and fled like the coward she was. Since dragons could smell a lie K’ev already knew that she wasn't Helena and let her know as the ship left Earth. She thought she could go back then but he was interested in her so he didn't mind her becoming his consort even though his dragon kept yelling at him that she was his mate.

Rhianna doesn't believe that humans have sent colonists to Elementa so K’ev takes her to see for herself. When she sees them and he tells her that the Draconians were there first and want the planet for their new home, she understands why his people and her people are about to go to war. The humans lied about finding it first and removing the Draconians flag only to replace it with their own and the government won't own up to the truth. Now K’ev's father, the king wants to punish the humans by killing them.

When K’ev and Rhianna spend more time together and find that they actually like each other, things quickly get dangerous because Rhianna is secretly in contact with Earth's president. So when K’ev finds out about that, he feels betrayed. Things take a quick twist at this point and a huge secret is revealed that changes the way this story could have ended but I loved this ending. I'm really looking forward to the next book now.