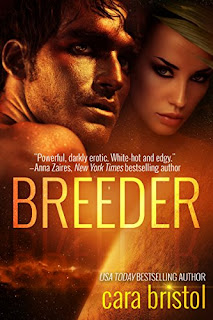 She was only meant to be the Alpha Commander's slave...but she became his everything.
High Commander Dak, a ruling Alpha of planet Parseon, purchases Omra strictly as a breeder slave. He intends to impregnate her, produce a son, and hand her off to his anointed beta partner, Corren. Any infractions of the rules by her will be harshly punished.

But as Dak and Omra discover a sexual bliss banned by law, Dak begins to question the traditions and ways of his people, causing him to jeopardize his command and endanger the life of the woman he has come to love.

Dak has enemies, men who will not hesitate to exploit his fondness for Omra, and use it to portray him as unfit to rule as Alpha. Can he expose the rampant cruelty and corruption in Parseon culture... or will the protocol he's spent his life defending, be the weapon used to destroy them and their love?

Omra is given to Dax the Alpha as his breeder. A breeder is used to give the Alpha's offspring and when they get the number of children they want, they give the breeder to another.

This world is brutal for females but Terrans (humans) have come in contact with this alien race and some of the cultural difference make for strange conversations between the men of this world. So when Dax brings her home and they start to spend time together, he starts to feel things for her that are against the rules of his world. He's not supposed to care for her, not supposed to care if she has pleasure during their coupling to make offspring but he does and she cares about him too.

I went into this book with my eyes wide open knowing that females are treated horrendously in this world but that things are slowly changing for some of the people who don't think it's right anymore. I wasn't expecting to like Dax right away but it didn't take long to see that he was a good guy and was going to treat Omra fairly well.

So while romance is hard to find at first, we do get it and I really liked the ending. This is a dark romance and the world is a bad place if you're a female but it seems that things might be changing and I liked that aspect of the story.