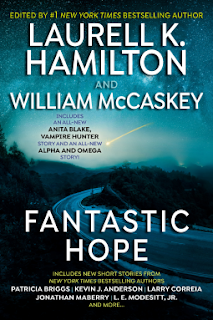 A child’s wish for her father comes true. The end of the world has never been so much fun. Conquering personal demons becomes all too real. It’s not always about winning; sometimes it’s about showing up for the fight. It’s about loving your life’s work, and jobs that make you question everything.

In this anthology, seventeen authors have woven together brand-new stories that speak to the darkness and despair that life brings while reminding us that good deeds, humor, love, sacrifice, dedication, and following our joy can ignite a light that burns so bright the darkness cannot last.

This is an anthology so I am going to do a mini review for each story.

When a plane is spotted flying over several villages and then people are found dead, the people in charge think someone is spraying chemicals over them. Turns out that the people in the plane weren't the problem, they were actually trying to help but other bad guys got wind of what they were doing and decided to stop them. It was a fun quick story.

Not In This Lifetime by Sharon Shinn

What if you were to remember all of your past lives and the same guy kills you in each of your lives? That's what happens to Sasha in this story. Sasha remembers some of the people who have been in her life during her past lives and she's friends with them in this life. So when she spots the man who kills her and she knows will kill her in this life, she goes about trying to change the outcome this time.

Chris is from the future and is sent to do things. Like if you could go back in time and kill Hilter, would you? So Chris has a mission to shoot Stanley in the heart for some reason but Stanley puts up a good fight and Chris ends up liking him but still he needs to finish his mission. This one had an ending that went in a way I wasn't expecting. Interesting idea.

No Greater Love by Kacey Ezell

Jennilee and Anna were forced to stay in a cave Dalton left and pushed carts through the snow with their meager belongings on them but Jennilee's father had told Anna who was about to give birth, he would be back. Anna was married to Jennilee's father. When Anna dies after giving birth, Jennilee knows she can't stay there so she follows the trail her father is on only to get hurt. A woman comes to her rescue but things are not right or normal with this woman but she is able to save them both but not in a normal way. This was a really fun story. Not what I was expecting at all.

Sent to a space station penal colony for a few years, Borges makes the best of his time in the mines. He must be wealthy because he is given special treatment and one of the other inmates who they refer to as the broken says he can hear a song coming from somewhere else. So when a scientist comes aboard to check something out, he introduces her to the broken and the broken makes contact with another life form who informs them what happen to them.

A dragon with a gambling problem lost the Excalibur sword in a gambling bet and now there's a bunch of supernaturals looking for it. Someone was also killing Golems and they couldn't seem to figure out why until the end of the story. With so many different supernatural creatures in this story it was fun to see what would happen next.

Quincy, the son of dracula watches a group of young people trying to summon a demon and spots a young woman who looks like the woman he loved and lost. He's taken with her and watches her and even talks with her. When he finds out what she and the others are up to it's almost too late to send the demon back to hell before it gets out and kills indiscriminately. But he's the son of dracula so thankfully things work out.

Asil and the Not-Date by Patricia Briggs

Asil was a wolf shifter and he knew that at some point his wolf was going to get free and probably kill someone. He was depressed but when the emails about going on dates started to anonymously come to him, it peeked his interest so he kept going on dates. Asil liked Tami even when he found out she was a white witch. A witch had killed his mate so his crabby wolf wasn't too happy about her being around him. Tami and Asil helped one of her clients when they found themselves in danger but then there's a big twist to this one and I liked it.

In The Dust by Robert E. Hampson

This story took place throughout a couple's journey first as kids, then teens and then as adults with their own kids. I never knew where this story was headed until the very end which was nice. I liked this one and liked how I had to read the story and pick up on little things in order to see where this one would end up.

I had a hard time figuring this one out at times. It was hard to tell where Estafen was, where he had been and what was going on. He wanted to change the way things were where he was but everyone and everything around him was making that difficult. When I was done, I finally figured out that this was a religious piece and that's probably why I had a hard time deciphering it for it to make sense to me.

Sam had recently been turned into a vampire and Delia owned the convenience store he worked at. She was a little afraid of him but he was just a lonely, young man that she was still friends with. When he bit her to save her life from terminal cancer, she knew he was one of the good guys and she made sure he had a place to work. This was a short, sweet story.

When an alien ships hovers over a city, a detective shows up and tells Samuel that they want him to meet with them. Samuel is a paleoichthyologist or someone that studies extinct fish. He was taken to where the ship was a a kind of transport box was there to take him to the ship where he met and talked with the alien. The alien talked and answered questions and then had a question for him. This was interesting and thought provoking. Definitely one of my favorites.

This story is told from the vantage point of a stuffed teddy bear. I liked this story. The bear had fun with a boy that grew up to have a child of his own but the man had a lot of problems that the bear really couldn't understand. The bear can enter dreams and see what their nightmares are and help them through their fears. This story broke my heart but it was really good.

A mother of a son who was born not quite right, living in a village where the villages grew to fear and ultimately hate Grendel, the son, the monster as he was called after he got older. A mother who could do nothing but move on after her husband was killed in battle and try to keep her son safe even though nothing could keep them safe from the hateful villagers. This was such a sad tale.

Bonds of Love and Duty by Monalisa Foster

The Donai were genetically engineered soldiers but in her lab they were just children or soon to be children in the gestation pods. She escaped with Andret, the oldest Donai soldier and some of the babies still in tubes. They landed on a far away planet and he kept the tubes filled with his kind safe until other Donai came looking for him.

Anita Blake was in her office when a man and woman walked in and accused her of getting their daughter pregnant. Turned out a zombie that Anita raised had sex with their daughter and when she put him back in the ground, the woman found out she was pregnant some time later. She gave birth to a normal baby but now she was laying in a hospital room dying from something the doctors couldn't figure out. So Anita finds out what's was wrong with the young woman and goes about fixing it. This is actually the story that I was most wanting to read. I got the book because of this author and am glad that I read this and the other stories.

Disclosure: I was given an ARC of this ebook via NetGalley but all thoughts and opinions are my own.
Posted by Mary Kirkland at 12:00 AM