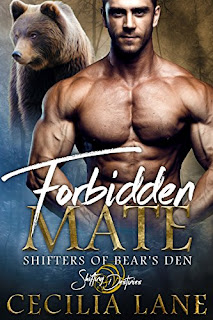 An Alpha Bound by Duty

Bear shifter Callum Strathorn has a job to do. With his father’s health declining, it’s up to Callum to take over as Mayor of Bearden.

When Leah Arden crashes her car near Bearden, Callum leads the first responders. He pulls the lovely woman from the wreckage, but as her wits return, she sees things that humans should never see. Forbidden things, like a mysterious town and a man shifting into a bear.

Callum has no choice. To protect his town and his clan, he keeps Leah captive in Bearden while he figures out damage control. He soon finds himself with a fiery and furious female on his hands. And if things couldn’t get worse, the stubborn and aggravatingly sexy woman smells and tastes just like his fated mate.

A Woman on the Run

Leah Arden lives a life haunted by secrets. She can't stay in one place for long or her past will catch up with her. With nowhere to turn, she doesn’t trust anyone, not until she meets Bearden’s gruff but handsome mayor.

Callum’s slow, sexy smile and quiet strength make her yearn for more. But when he lays down the law and forces her to remain in Bearden, she grows desperate to find a way to escape. Even if that means betraying the one man who makes her want to put down roots.

As Leah’s secrets unravel, the danger grows, looming over her and all of Bearden. Callum's enemies are looking for weakness, and he handed them one on a silver platter. Can the town’s alpha keep his people safe, especially the woman who is fated to be his?

~~~
Step into the world of Shifting Destinies, where the men and women you meet might just be a little more than human. Their towns are protected by magic, and their hearts are open and ready for love. But watch your step - more than darkness lurks in the shadows.

Leah left her boyfriend who she got fed up with cheating on her. But before she left she took a map that she thought would lead her to some kind of treasure. She wasn't sure about the map until Jamin, her ex boyfriend came after her for the map. He had been stalking her movements and almost broke down her motel door at one point. He was angry and she wasn't sure just how far he and his cronies would go once they finally caught up to her so she had to keep moving.

Callum was the leader of his town and was also a bear shifter. Humans weren't allowed in his town because humans could never learn of shifters, it would be too dangerous for his people. But when her car crashes and he pulls her from the crash, he has to bring her into town after one of his people shifts in front of her.

Once she finds out what Callum and most of the town really is, Callum has no choice but to make her stay because a human can't be trusted not to tell everyone else that shifters exist. But Leah is running from her ex, who turns out to be worst than she imagined and brings all kinds of danger right to her doorstep. Callum knows that Leah is his mate so he wants to protect her as well as keep her but she's keeping so many secrets that it might be too dangerous for him and his people to keep her around.

This story had a huge twist and I loved it, never saw that coming at all. This was such a fun read and I liked getting to know some of the secondary characters who I hope will pop up in this series because now I want to read more.