Review: Greta and the Gargoyle by Honey Phillips 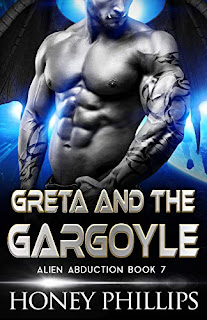 A condemned woman. An alien guard.

Sentenced to death for killing her alien master, Greta’s only hope is a compassionate guard. Despite his frightening appearance, she is drawn to the massive alien - but is what she feels only gratitude?

Mikaroz has been waiting his whole life for the perfect mate but he never expected her to be a condemned prisoner, let alone a small human female. He cannot allow her to die for defending her honor, no matter what he has to do to save her.

With their lives on the line, can Greta risk trusting him—with her life, and her heart?

A standalone romance set in the Alien Abduction universe, the events in this story overlap the events at the end of Cam and the Conqueror. For mature readers only.

Greta was kidnapped from home and sold into slavery. Now living on a ship awaiting her death sentence for killing her master, she encounters Mikaroz who is one of the guards.

Mikaroz encounters Grace aboard the ship she's being held on awaiting her sentencing for killing her master. He finds her intriguing and wants to try and help her but he's not sure about how to do that.

Mikaroz uses his own credits to get Greta something to eat but so far she's refused anything and he doesn't understand why. So he tries to give her a translator so they can communicate but that doesn't go as planned at first because after all she's been through, she doesn't trust anyone. But once he is able to talk to her and find out what kind of foods she will eat, they talk more and his feelings get deeper for her.

When a dangerous situation arises aboard the ship, Mikaroz decides to help Greta escape her fate and he's hoping she'll stay with him once she's free. If she were able to get back home I'm not sure she would have stayed with him but she sees that he really cares for her and in truth she starts to have strong feelings for him when he puts his life on the line for her.

I haven't read this series so I wasn't sure I wouldn't be completely lost while reading this but I wasn't. I won this book back when Amazon was still doing the giveaways and figured I'd give it a read at some point. It was a short novella length story and I really liked these two.

Mikaroz found his mate in the feisty Greta and she found a gargoyle alien to love after having gone through a terrible ordeal.