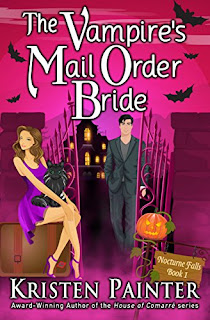 Welcome to Nocturne Falls, the town that celebrates Halloween 365 days a year.

The tourists think it's all a show: the vampires, the werewolves, the witches, the occasional gargoyle flying through the sky. But the supernaturals populating the town know better.

Living in Nocturne Falls means being yourself. Fangs, fur, and all.

After seeing her maybe-mobster boss murder a guy, Delaney James assumes a new identity and pretends to be a mail order bride. She finds her groom-to-be living in a town that celebrates Halloween every day. Weird. But not as weird as what she doesn’t know. Her groom-to-be is a 400-year-old vampire.

Hugh Ellingham has only agreed to the arranged set up to make his overbearing grandmother happy. In thirty days, whatever bridezilla shows up at his door will be escorted right back out. His past means love is no longer an option. Not if the woman’s going to have a future. Except he never counted on Delaney and falling in love for real.

Too bad both of them are keeping some mighty big secrets...

Delaney is working at a place where she makes sweet treats and has fun doing it until she witnesses her boss shoot someone. She even records the shooting and then gets out of there real fast. She has no other choice than to change her name and sign up to be a mail order bride just so she can find a safe place to hide for a while.

Hugh is a vampire and his grandmother signs him up to receive a potential wife from a mail order bride service. The only problem is he doesn't want to marry anyone and the woman who ended up coming isn't the woman he was matched with. Delaney found his file and decided to assume this woman's name and pretend to be her. Hugh thinks that she knows he's a vampire and is alright with it when in fact she knows nothing about that part of him.

They actually seem to be getting along really well when someone comes to Hugh and lets him know that she isn't who she said she is. When the dust settles, Hugh decided to help Delaney instead of being mad at her. They get the werewolf Sheriff involved into making sure the proper authorities know about the murder she witnessed and they get back to getting to know the real people in front of them. When Delaney finds out that Hugh is a vampire, things go a little crazy for a minute because she doesn't believe him at first. After that she just needs a little time to wrap her head around it all.

These two really fall hard for each other while Hugh is keeping her safe and he turns out to be a really sweet guy. This book had everything in it that I like about this kind of vampire romance. Delaney's cat, Captain Underpants endeared himself to the household by doing nothing more than winding himself around their feet and getting chubbier while eating whatever they gave him. I love when there's animals in the books even when they don't do anything but sit pretty and get petted.

I will definitely be reading more of this series now.