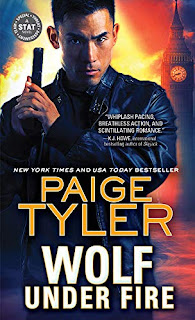 For the cases no one else can solve, they send in the Special Threat Assessment Team

Supernatural creatures are no longer keeping their existence secret from humans, causing panic around the globe. To investigate, monitor, and—when necessary—take down dangerous supernatural offenders, an international task force was established: The Special Threat Assessment Team.

STAT agent Jestina Ridley is in London with her team investigating a suspicious kidnapping. Over her radio, Jes hears her teammates being savagely attacked. She runs to help, but she's too late. The only survivor, Jes calls for backup and gets former Navy SEAL and alpha werewolf Jake Huang and his new pack. Convinced that the creature who butchered her teammates was a werewolf, Jes doesn't trust them. But if they're going to uncover the facts and make it back home alive, she'll need Jake's help. And with everything on the line, Jes will have to accept Jake for who he is, or lose the partner she never expected to find...

Jes was on a mission with her teammates when some kind of paranormal creature took out two of her team. She calls for backup and that when Jake and his werewolf teammates come in to help track down the paranormal that killed two of their own.

Jake is a werewolf and once he sees a picture of Jes, he's smitten with her before he joins her team. But once they meet he's a little disappointed in how she reacts to him and his team being werewolves. She doesn't know them, does't trust them or him and pretty much expects him to act like a monster and not the cookie eating, gentleman that he actually is.

It isn't until they find themselves in dangerous situations and have to rely on one another that the ice starts to break and they start to trust each other. Jake has felt possessive and wanted to keep her safe even before they became friends but he didn't really understand why. Once they reveal just how much they care about each other, it's hard for them to keep their hands to themselves, even while they still find themselves going on missions to find the kidnapped children.

Tracking down the paranormal that killed Jes's teammates and are also kidnapping children brings them face to face with a hard to kill opponent. But once we find out who the bad guys are and what they are really doing it was quite the shock and I really enjoyed the ending. I enjoyed getting to know all of these characters and am looking forward to reading more of this series.

Disclosure: I was given an e-ARC of this book via Edelweiss but all thoughts and opinions are my own.
Posted by Mary Kirkland at 12:00 AM