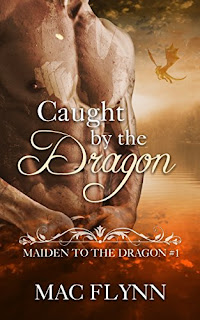 Miriam Cait seeks love, or rather, her friend seeks it for her. Her friend’s latest date suggestion is refused on account of his dark eyes. There’s something not quite right with them, and Miriam soon finds out why when he comes knocking on her door, and knocking her out.

Miriam wakes up from the confrontation with more than just a headache. Shackles cover her ankles and wrists, and she’s on her way to being auctioned off to a bunch of self-proclaimed dragon lords. It all seems too fantastic to be real, but as the evidence starts mounting against sanity Miriam realizes she may be in deeper trouble than she thought.

Miriam turns a guy down when her friend introduces her to him and later she finds herself kidnapped and in another dimension, being auctioned off to dragon lords.

Xander is a dragon lord, the rule of his world says that human females are taken and brought to his land to be picked as ether mates or servants. Bringing humans to his land helps keep the bloodlines good by bringing in new blood. His own mother was one of these females but he has fond memories of her, she had a good life.

Once the women are rounded up and shown to the dragon lords, they get to pick the females they want but Miriam doesn't make things easy for Xander. She tries to run away and go home only to find out that once you go through the portal, you can never go back or you'll be killed by it. It's a one way trip. Only the kidnappers who are from another world can travel back and forth bringing women when they have a need for new blood.

Miriam and the other women are taken by their new mates and while some of the women are happy with their new lives because they are taken care of very well and will want for nothing, Miriam still wants to go home but she gives Xander a chance.

This book surprised me because Xander and some of the other dragon lords are actually decent people. Xander didn't think it was right that women were kidnapped and brought here against their will but it was the way of his world. He was a nice guy and tried to make sure Miriam was made comfortable and tried to give her what she needed so she could get used to her new home. After a dangerous fight with another dragon, Xander is hurt and we can see that Miriam genuinely cares about him. I thought it was a good first book for this series.